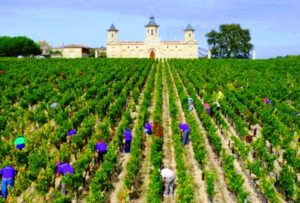 Jean Guillaume Prats told us, 2011 Cos d’Estournel set a modern day record for an early start to their harvest at Chateau Cos d’Estournel. He added, “This was the estates second earliest harvest on record. To find an earlier date, we needed to back to 1893!”  While the specific date to start picking was not set in stone, the original plan was not to begin their Bordeaux harvest on September 5.  But due to a ferocious storm that swept through the area, 2011 Bordeaux Harvest Massive Storm Slams the Northern Medoc, any hope of waiting went out the window.

We asked Prats why they started their 2011 Cos d’Estournel harvest so early?

Prats: “We experienced a huge storm Friday, September 2.  We needed to start picking early, to make sure the grapes do not develop rot or botrytis.”

JL: What was your original plan for 2011 Cos d’Estournel?

Prats: “We initially planned to start harvesting 2011 Cos d’Estournel about September 9, with the young vines. After the storm, we gave ourselves the time over the weekend to assess the situation and make the appropriate decision: Waiting and see how it will develop in the days to come depending on weather.”

JL: Did the change of dates allow the grapes enough time to ripen for the 2011 Cos d’Estournel?

Prats “We are “lucky” this 2011 Cos d’Estournel vintage is extremely early. The damages in terms of phenolic ripeness of the grapes should be very minor. If this was a later year, like 2008, 2009, or 2010, the effects would be much worse.

JL: What damage did your vines sustain from the hail storm?

Prats: Most of the damage was to the leaves and some fruit.  The vines are in good shape.

JL:  What will the combination of the storm and an early mean in terms of yields for your 2011 Cos d’Estournel wine?

Prats: “In terms of yields, it is too early to say what will be the lost of volumes.”