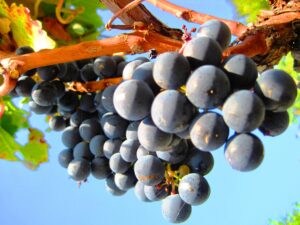 2011 Bordeaux harvest gets started with producers in Entre deux Mers and Sauternes.
Some properties in the Bordeaux appellation of Entre deux Mers began their 2011 Bordeaux harvest today. But the vintage is not going to enter the history books as the earliest harvest on record as was predicted earlier this year. Chateau d’Yquem started their harvest for Sauvignon Blanc to be used in their dry white wine known as Y, today as well.  (Photograph courtesy of Chateau d’Yquem) 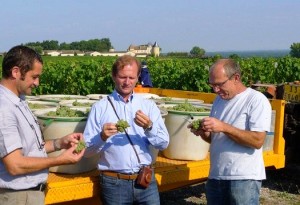 The 2011 Bordeaux harvest got off to a slow, cold start with lower than normal temperatures. That was followed by a long period of warm, draught conditions that continued through June and much of July. Those warm and occasionally hot, dry conditions damaged some of the fruit. While that does not effect the quality, it reduces the yield, which means 2011 Bordeaux will be a smaller harvest than normal.
Until recently, many vintners were sure 2011 would be one of the earliest harvests in history, Some growers were sure you would have to go all the way back to 1893 to find a vintage that was picked as early as 2011. That is no longer the case. Things changed due to some rain in July and a cool August which also brought some much needed rain. But the temperatures were cooler than normal which slowed things down.
It’s far too early to make comments on the quality of the 2011 vintage. A lot can happen between today, the date the fruit is picked and during the making of the wine. However, with the technology and knowledge available to growers and wine makers these days, with the willingness to reduce effective low yields, if a producer is agrees to take the necessary steps, good wine can almost always be produced. The only question is, how much potential wine are they willing to sacrifice in the name of quality? And of course, what will this cost the consumer?