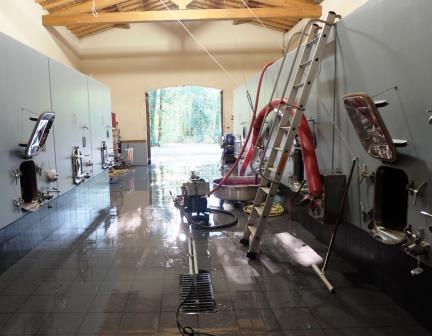 Learn everything about Clos du Jaugueyron Haut Medoc with wine tasting notes and wine with food pairing tips. Learn all the best vintages, wine ratings, a history of the property, information on the vineyards and winemaking. If you want to read about other important, Bordeaux Chateaux: Links to all Bordeaux Wine Producer Profiles

Clos du Jaugueyron has a long history in the Margaux and Haut Medoc appellations that can be dated back to 1898. However, the modern era for the estate begins in 1993, when the winery was founded by Michel Theron and Stephanie Destruhaut.

To get their winery created, they did not purchase land. Instead, they began renting vineyards, which has turned out quite well for them, based on their wines and their expansion over the years. Michel Theron came to Bordeaux due to his family’s interest in wine, as they were growers in the Southern Rhone, in the Minervois region, located in the Languedoc appellation.

Clos du Jaugueyron takes its name from some of their vineyards in the Left Bank which is known as Grand Jaugueyron and Petit Jaugueyron.

Clos du Jaugueyron produces 5 wines, from 2 different vineyards. In the Haut Medoc appellation, they have a small, 3.4 hectare vineyard for Clos du Jaugueyron that is planted to 53% Cabernet Sauvignon, 40% Merlot and 7% Petit Verdot. Those vines are in the southern part of the appellation, not far from Chateau La Lagune and Chateau Cantemerle.

They also own 7 hectares of vines which are located in the Margaux appellation planted in the communes of Margaux, Cantenac and Arsac. Their better parcels are placed inland, close to Chateau du Tertre and in Cantenac. Many of their vines are young, due to replanting. However, they have old vines as well, that are close to 40 years of age. Their oldest vines are more than 100 years of age! Those vines are planted close to Chateau Palmer.

In total, from their vines in Margaux they produce 3 wines.

Clos du Juagueyron Margaux, their top wine from the appellation is usually a blend of 70% Cabernet Sauvignon, 20% Merlot, and 10% Cabernet Franc. Clos du Jaugueyron Perrain Margaux takes its name from a specific parcel of vines planted to 75% Cabernet Sauvignon and 25% Cabernet Franc. And Clos du Jaugueyron Margaux Nout, which is made from the estates youngest vines and includes a higher percentage of Merlot.

The vineyard is planted to a vine density of 7,000 vines per hectare. The terroir is gravel and sand soils. The best terroir for the estate is in Margaux in the Cantenac sector, which is where they have their Grand Jaugueyron and Petit Jaugueyron parcels. In 2008 Clos du Jaugueyron began converting to Biodynamic farming. In 2012 Clos du Jaugueyron was certified 100% organic in their vineyard management techniques.

In Margaux, and in the Haut Medoc appellation, Clos du Jaugueyron is now also certified as being 100% biodynamic.

To produce the wine of Clos du Jaugueyron, vinification takes place in small, temperature-controlled, cement vats that vary in size from 30-hectoliters to 40 hectoliters up to 50 hectoliters. Malolactic fermentation takes place in French oak barrels. The wine is aged in an average of 30% new, French oak barrels for about 12 months before bottling for the grand vin. The other wines do not see any new oak during the aging process.

Not much wine is produced as production for their Margaux wine is on average close to 2,000 cases per year. For the Margaux, there is a second wine, Petit Jaug.

Clos du Jaugueyron needs some time before it can be enjoyed. Young vintages can be decanted for an average of 1 hour or so. This allows the wine to soften and open its perfume. Older vintages might need very little decanting, just enough to remove the sediment.

Clos du Jaugueyron is a perfect match with Asian dishes, hearty fish courses like tuna, mushrooms, and pasta as well as cheese.