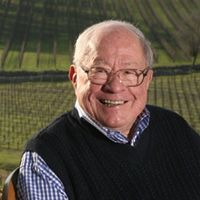 With deep sadness, we report the news that one of the true legends in the modern history of Napa Valley, Joseph Phelps passed away at the age of 87.

Say the name Joseph Phelps and most wine lovers know the wine. A few wine buffs also know his history and the part Joseph Phelps played in the creation of the modern era for wineries in the Napa Valley. Clearly, with more than 40 years as a grower and wine maker in Napa Valley, Joseph Phelps deserves to be remembered as one of the true pioneers in the California Wine Industry along other greats like Robert Mondavi.

Born in 1927, Joseph Phelps developed his interest in producing wine in California during the 1970’s. At the time, Phelps was working for his families construction firm, located in Greeley Colorado. Phelps graduated in 1951 from the Colorado State University with a degree in construction management. He also served honorably in the US Navy during the Korean War. He reached the rank of lieutenant.

Joseph Phelps became enamored with the wine business while he was working in Napa Valley as a contractor. At the time, his company was hired to build the Souverain winery. Prior to building the Souverain winery, Phelps was already quite the wine lover, with a large collection of mostly Bordeaux and Rhone wine.

Joseph Phelps Vineyards was born when Phelps decided to move to California full time. His initial purchase was the 600 acre Connolly cattle ranch he purchased in 1973. The land was located just east of the Silverado trail. He turned that first tract of land into a working vineyard with the assistance of Walter Schug, who also later went on to found his own winery as well. Being a contractor, it was easy for Phelps to finish construction on the Joseph Phelps Vineyards winery the following year. 1974 also saw the debut vintage for Phelps Insignia.

From that initial purchase, one of most popular, and best known vineyards and wineries was born. Cabernet Sauvignon was starting to become widely planted in Napa Valley after 1966. Phelps embraced the Left Bank varietal. He was also one of the initial growers to produce a Syrah in the golden state. Prior to the revival of Syrah in Napa, the grape was barely planted in the region, having fallen from favor during prohibition.

In 2005, Joseph Phelps finally took a step back and retired as Chairman and from the Board of Directors. His son, Bill Phelps took over his position..

Joseph Phelps was more than a winery owner. Aside from helping build and create what we know of as the modern day, Napa Valley, he also owned the famed Oakville Grocery, founded the Wine Service Cooperative, which helped other fledgling wineries get started, he was also instrumental in helping to create housing for the migrant workers that were needed to help pick grapes during the harvest in the quick growing Napa Valley.

Joseph Phelps is survived by his four children, eight grandchildren and two great-granddaughters.