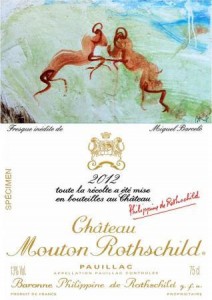 It’s not the Oscars, Academy Awards or the Emmys. But in the world of fine Bordeaux wine, the yearly announcement of the new label for the next vintage of Chateau Mouton Rothschild is almost as important. It’s certainly equally secretive. The name of the artist is one of the wine world’s best kept secrets. The First Growth estate has utilized a new artist to design the label every year since the tradition was began in 1945.

For the 2012 Mouton Rothschild, the Baroness chose Miquel Barcelo, born in Mallorca, Spain in 1957. Today, Barcelo is considered to be one of the leading Spanish artists. Miguel Barcelo graduated from the Barcelona School of Fine Arts in 1974. Before that, he studied at the Decorative Arts School in Palma de Mallorca. 1982 was not only a great vintage for Chateau Mouton Rothschild, it was also the year Miquel Barcelo began gaining attention outside of his native country. This took place when Rudi Fuchs picked Miquel Barcelo to represent everything that was going on with Spanish art at the time. 6 years later, in 1988, Miquel Barcelo began incorporating African influences into his paintings.

Miquel Barcelo maintained an artist’s studio in Paris, which he often considered as his second home. In 2004, Miquel Barcelo produced a series of water colors based on Dante’s Divine Comedy that were prominently displayed at the famous Louvre Museum in Paris. At 47 years of age, he became one of the youngest artists to have a major show at the Louvre. He has had other important shows in France, including one at the influential, Bordeaux Museum, the Center for Contemporary Visual Arts, also known as the CAPC. With the strong connection to France, and of course Bordeaux, it’s easy to see Miquel Barcelo as the perfect fit for the 2012 Chateau Mouton Rothschild.

As for the 2012 wine, our comments made it clear that it is one of the top wines of the vintage! We last tasted it April, 2013. “2012 marks the debut vintage utilizing the new facilities at Mouton Rothschild in Pauillac. Stone, cedar, tobacco, cassis, orange liqueur, slate and fresh herbs create the perfume. The wine is structured, refined, masculine and tannic. The tannins are ripe, powerful and strong, giving the structure to age for patient consumers. Blending 90% Cabernet Sauvignon, 8% Merlot and 2% Cabernet Franc, the wine reached 13.2% alcohol. This is quite nice for the vintage. 94-95 Pts”

We’re looking forward to retasting and writing updated tasting notes on the wine in bottle when we return to Bordeaux in April 2015.