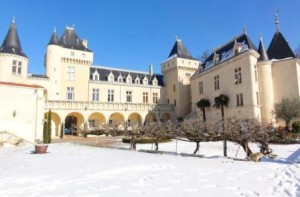 In devastating news, it is being reported that the popular and young James Gregoire, the owner of Vignobles Gregoire which included Chateau de La Riviere, located in the Fronsac appellation, died in a helicopter crash just one day after selling his chateau to a wealthy Asian investor. In a terrible twist of fate, the previous owner also died in a flying accident when the Cessna plane he was flying in crashed. That makes three owners in row of the same chateau that have died in flying accidents!

James Gregoire was known as an experienced helicopter pilot who owned and enjoyed flying his own helicopter. Sadly, Gregoire had just closed a deal to sell Chateau de la Riviere the day before, Thursday, December 19. Chateau de La Riviere is the largest estate and vineyard in the Fronsac appellation at 65 hectares. Chateau de la Rivere was sold to the Chinese billionaire Lam Kok. This deal is said to be the largest investment by an Asian yet in a Bordeaux vineyard, surpassing the deal for Chateau Bon Pasteur that took place earlier this year. Rumors about the price peg the deal at close to 30 million Euros!

The 12 year old son of Lam Kok was also on the helicopter as was another as of yet, unnamed passenger who might have been working as an interpreter for Lam Kok. The group was said to have been flying over the Right Bank vineyard surveying the land when the accident took place.

The accident was reported when James Gregoire and the other members of the group did not return after taking off with Lam Kok for their overhead view of the estate and vineyard. It has been speculated that the helicopter crashed into the Dordogne river as no traces were found of the helicopter. More than 100 people were said to have combed the area hoping to find survivors, or traces of the missing helicopter. Late in the night, Friday evening, parts of the wreckage were discovered. The search was slated to start again at daybreak, Saturday morning.