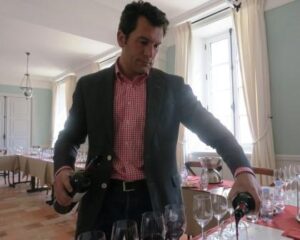 2011 Montrose From a blend of 63% Cabernet Sauvignon, 22% Merlot, 12% Cabernet Franc and 3% Petit Verdot.  100% of the vines were effected to some extent by the September hail storm. As the hail was mostly small stones, only 2% of the harvest set for 2011 Montrose was lost. Yields for 2011 Montrsoe were low due to the problems caused by sunburn and a lack of water with the Cabernet Sauvignon as well as the loss suffered from the hail storm.    Deep in color, earth, cedar wood, mineral, clay, crème de cassis scents lead to a full-bodied, concentrated, masculine, tannic, brawny wine filled with ripe cassis and bitter chocolate. 91-93 Pts

2010 Le Dame de Montrose – 72% Merlot and 28% Cabernet Sauvignon produce a wine that starts with earth, stone and cassis scents. Medium-bodied, soft-textured and round, the wine ends with a creamy blackberry finish. There is a hint of green in the end notes. 87-88 Pts

I also had the chance to taste the 2009 Montrose in bottle. Having tasted the wine in barrel, I was looking forward to seeing how the wine showed when it was finished.

2009 Montrose – Opaque in color, coffee, licorice, chocolate, plum, blackberry and ripe cassis in the nose lead to a massive, fleshy, ripe, dense, opulent, mouth-filling wine. Fresh, ripe and powerful, the long blackberry and spicy cassis-filled finish remains in your mouth for 50 seconds!  Due to the incredible density, structure and concentration found in this vintage of Montrose, lay this down for 15-20 years and you’ll have a legendary tasting experience.  98 Pts
2009 Dame de Montrose – Licorice, smoke, coffee, blackberry, round, sweet, soft and filled with ripe black cherry, herb and fresh blackberry. 92 Pts