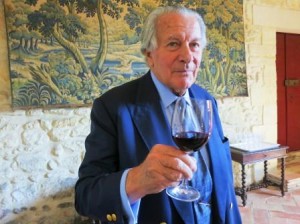 2011 Leoville Barton – 2011 Leoville Barton  – From an assemblage of 80% Cabernet Sauvignon, 15% Merlot and 5% Cabernet Franc, the wine will be aged in 80% new oak. The wine reached 12.5% alcohol. According to Anthony Barton, with a little more rain, the wines could have been as good as 2009 or 2010.  Barton agrees prices must come down for the 2011 Leoville Barton and other Bordeaux wines to sell. In his view, even 2010 Bordeaux was too expensive. Regarding 2011 Leoville Barton, Anthony feels it’s a vintage to drink young while waiting for the 2010 and 2009 to develop. Deep color with lead pencil, earth, flint, cassis and truffle scents in the nose. Tannic, fresh, bright, crisp cassis is found in the finish. 91-93 Pts