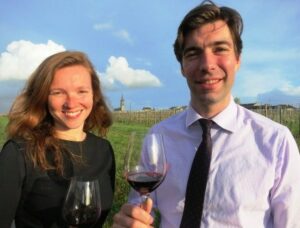 2011 Clinet  –  From 85% Merlot, 12% Cabernet Sauvignon and 3% Cabernet Franc, the wine reached 13.5% alcohol and will be aged in 55% new oak, which is slightly less than the property used in recent previous vintages. Deep purple in color, truffle, chocolate, boysenberry, spice box and black cherry liqueur come alive with little effort. Sexy, rich, opulent and concentrated with pure chocolate-covered dark berries, this is a wine of pleasure and elegance. 95-96 Pts

Jeff Leve “How did your vineyards cope with the drought suffered during the growing season for 2011 Clinet?”

Ronan Laborde  “Our old vines in the clay soils helped us in the drought.”

Jeff Leve “Did you work differently in your Pomerol vineyards this year to help your old vines for the 2011 Clinet?”

Ronan Laborde “We removed the grass between the vines earlier than usual. This allowed the vines to find the water in the soil. We also left enough leaves to protect the vines from the sun.”

Jeff Leve “When did you pick?”

Ronan Laborde “We harvested the young vines September 7 and September 14.  We picked the remaining Merlot September 22 and 23. The Cabernet Franc and Cabernet Sauvignon were harvested a few days later on September 26.”

Jeff Leve “Did you have problems with rot?”

Ronan Laborde “Actually, 2011 in Bordeaux was very ecologically friendly. Due to the dryness in the vineyards, we did not experience problems with rot.”

Jeff Leve “Did you need to sort more in 2011 than in previous vintages to produce 2011 Clinet?”

Jeff Leve “How much wine will you have with the 2011 Clinet than you ended up with in previous vintages?”

Jeff Leve “Are there any changes at Clinet this year?”

Ronan Laborde “We recently purchased 3 hectares of vines on very good terroir. At this moment, I am not sure how much of that will be included in 2011 Clinet. If I had to guess, it would be less than half.”