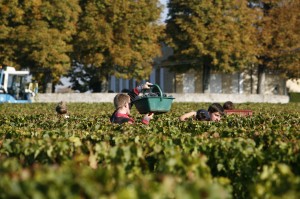 With its clay soils and preference for Merlot grapes, Pomerol is usually the first of the major Bordeaux appellations to harvest. But that was not the case with every chateaux in this difficult Bordeaux vintage.  Each chateau picks their fruit, at the time they think will allow them to produce the style of wine that offers the best representation of their terroir.

Jean-Michel Laportre of Chateau La Conseillante discussed their 2011 Bordeaux harvest and growing season while explaining what they are seeking to achieve with this tricky vintage.

JL: What are your early thoughts on the 2011 La Conseillante vintage?

Laporte: “2011 La Conseillante should be a fine one. I’m quite confident“.

JL: Did the draught effect your vineyards at La Conseillante?

Laporte: “The only matter is to check whether the drought and the early water stress will have an effect on the aromatic complexity. Because all the other numbers (from grape samplings) look great! We have a lot of color, amazing maturity, etc”.

JL: Is the 2011 La Conseillante  harvest your earliest harvest on record for your Pomerol estate?

Laporte: “We picked the youngest vines on September 1st. It’s like 2003 and probably just after what they did in 1893”.

JL:  What level of maturity did your fruit reach?

Laporte: “For 2011 La Conseillante , maturity  should be perfect. The main interest is that the weather is normally better at the  beginning of September than at the end or in October. So, it’s less stressful and there’s less hurry to harvest with more chances to improve the maturity.”

JL: How would you describe the 2011 growing season at La Conseillante ?

Laporte: “Crazy! The spring very warm and dry. The summer was quite complicated. The opposite of a normal year. But the vines went through it quite well. They never really suffered from drought as the growing season began very early. They had the time to get in use with it. It would have been more dangerous if spring was very rainy, and summer very dry and hot. We suffered more in 2003 because of the hot weather. The heat took its toll more than drought”.

JL: Did the July rains come at a time that helped your vines at La Conseillante?

Laporte: “Yes, because they really needed some water. But it was not really rainy: 30% less than a normal July month. The main point in July was the temperature. It has been even cooler than une, and almost than May. It permitted the vines to breath and it filled the small berries”.

JL: Did you use thermal imagery for your vineyards?

Laporte: “We used pictures taken by a plane. We get a better precision by this method. It will specially help to cut the vineyard depending on the vigor, which we’ll fully use next year with our new vatroom”.

JL: Can you please share some early technical information with us? What are your potential alcohol levels, pH numbers and IPT numbers?

JL: 2010 is known in part for the combination of high alcohol and low pH. With your numbers, at this point, what do you think 2011 will be known for?

Laporte: “We’ll probably have a better balance than 2009 and 2010. This will be a more classic style for Bordeaux. Alcohol should be lower and acidity a bit higher. This will certainly help the freshness and taste to explode!”