Learn everything about Domaine Jean Michel Gerin Cote Rotie with wine tasting notes, wine and food pairing tips, best vintages, a history of the property and information on the vineyards and winemaking. If you want to read about other important wineries and wine makers from the Rhone valley: Links to all Rhone Valley Wine Producer Profiles

Domaine Jean-Michel Gerin is not one of the oldest properties in the Northern Rhone Valley. Far from it. In fact, the estate was created in 1983 by Jean Michel Gerin, although it was not until 1987 that he began to bottle and sell their wine.

The following year, in 1988 Gerin made his first purchase of vines in La Grandes Places.

In 1996, Domaine Jean-Michel Gerin added to their holdings with the purchase of land on La Landonne. Not content to only produce wine in Cote Rotie, in 2002, he entered into a joint venture with a few other French wine makers to produce wine in the Priorat appellation in Spain.

In 2007 Domaine Jean-Michel Gerin began an extensive project of rebuilding the terraces and improving their drainage systems in their steep, rocky, hillside terroirs. This was followed by the planting of vines in the La Vialliere lieu dit that went into production starting with the 2007 vintage.

Today, Domaine Jean Michel Gerin owns 12 hectares of vines in the Cote Rotie appellation. The domaine is going to remain a family affair as he is now joined by his two sons, Michael Gerin and Alexis Gerin. 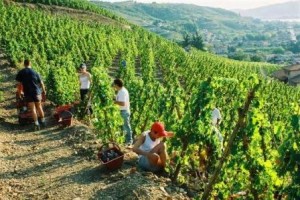 Jean-Michel Gerin produces 4 Cote Rotie wines, a Condrieu and a wine from the St. Joseph appellation.

Jean Michel Gerin Les Grandes Places is produced from a 1.4 hectare parcel of 40 year old Syrah vines in a terroir of mica and schist. The wine is aged in 100% new, French oak barrels for up to 24 months before bottling. The first vintage was 1988.

Production averages 400 cases per year. Les Grandes Places is the top wine from Gerin. It’s a rich, sensuous, stylish Cote Rotie. But not much wine is made, making it quite hard to find, and expensive, especially as the wine ages.

Interestingly, this wine is aged in close to 20% new, American oak barrels.On average, 10% Viognier is included in the blend. The grapes are co fermented. Production is close to 2,500 cases per vintage. For 2 vintages, in 1995 and 1996, they produced a Champin Junior from their younger vines.

Jean Michel Gerin La Vialliere is made from 1.75 hectares of 100% Syrah planted in the La Vialliere lieu-dit that was aged 100% new, half muids.

Jean Michel Gerin La Landonne comes from 100% Syrah. This wine is produced from a tiny 0.4 hectare parcel of vines which are relatively young at close to 20 years of age.

The grapes are completely destemmed. The wine resides in 100% new oak barrels for about 18 months before bottling. The debut vintage for La Landonne was 1996. On average, slightly more than 150 cases are produced every year.

The wines of Jean Michel Gerin are round, opulent, ripe and generously textured. They display some oak, along with ripe black and red fruit, pepper, spice and minerality. They have the ability to age well.

Domaine Jean-Michel Gerin, when young, should be decanted at least 1-2 hours, give or take, allowing the wines to soften and open their perfume. Older vintages might need very little decanting, just enough to remove the sediment.

Domaine Jean-Michel Gerin is usually better with 8-10 years of cellaring and should be at its best between 10-25 years of age.