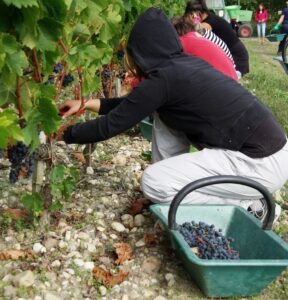 JL: What happened during the growing 2011 du Tertre growing season with your vines at Chateau Du Tertre?

Van Beek: “The 2011 du Tertre is the product of a unique vintage. March, April, May and June were extremely dry with more than 190 mm of hydric deficit and signs of stress in a vegetal level. The flowering stage was ideal with no cryptogamic disease pressure. At the beginning of the “veraison”, we had an established lack of water, which was compensated by mid-July rains afterwards. The ripeness was much slower than expected. In the end, it allowed to time for the Cabernet Sauvignon and Cabernet Franc to reach balance”.

JL: 2011 is a Bordeaux harvest shaped by draught. Did the July rains come at a time that helped your vines for the 2011 du Tertre?

JL: Due to fears of rot, some producers began picking slightly earlier than usual. Did you alter your schedule at Chateau du Tertre?

Van Beek “Even if for some parcels, it was necessary to start the harvest within the week, there was no emergency for most of the other parcels. The feature is all the more true with Cabernet Sauvignon. We are planning on finishing the 2011 harvest around the beginning of October, if the sanitary state remains clean and healthy”.

JL: Did the drought present you with any unique or specific challenges with your 2011 Bordeaux harvest in Margaux?

Van Beek:  “Every year, we have the same challenge, harvesting at the right time, when the grape is close to its optimal maturity and its sanitary state remains perfect”.

JL: With the recent storms, did you harvest dates change? Do you have fears of rot? If so, what are doing to avoid that issue?

Van Beek: “Luckily, we were not affected by hails and recent storms only brought us some rain. The accumulation of rain was close to 70mm mid-July, which is the standard of these last 30 years”.

JL: Do you use satellite imagery?

Van Beek: “We used satellite imagery for the first time one year ago. This allowed us to confirm or specify the differences of our terroir following the research we made in 2008.

Van Beek: “We used optical sorting since the 2010 Bordeaux harvest. We think this equipment will be useful this year. It will help us sort and separate the grapes grilled by the sun and the portions of berries that did not perfect ripeness, because of the hydric stress of July.”

JL: The 2011 Bordeaux harvest was originally forecast to be the earliest vintage since 1893. That changed and the harvest was moved back a few weeks. What allowed for the change ?

Van Beek: “This is essentially the disruption of the climate at the beginning of July that completely modified the initial trend. The spring-like draught and heat resulted in a great earliness and the restoration of a cooler and wetter climate have replaced everything is a normal context. Thus, the 3 weeks’ advance has gradually been reduced by two.”

JL: What vintage does 2011 Bordeaux remind you of so far?

Van Beek: “No other vintages remind me of so extremely dry spring conditions (a little bit like
1976 even), followed by an atypical summer. The “veraison” started very early,then took its time and almost ended in the average period. By September 8th, Cabernets don’t seem to be mature enough and we have only one desire: let things work out… the weather forecast seems very good for the coming weeks”.

JL: Can you please share some technical information? What are your potential alcohol levels, pH readings and IPT numbers from your early vats?

Van Beek:  “The potential alcohol levels presently vary from 12.6° to 13.2° with a total acidity of 4 g/l of H2SO4 and a pH number at 3,4. The tannic potential seems to be good but will only be valuable within the end of the alcoholic fermentation”.

JL: With those early numbers showing lower alcohol than we’ve seen lately, coupledwith higher levels of acidity, what specific choices will you need to make during the vinification for 2011 Bordeaux wine?

Van Beek: “We are going to begin the extraction carefully and adapt the nature of pumping over accordingly. The most difficult task this year, will be to extract enough tannin and color to obtain all the finesse and elegance we are seeking at Chateau du Tertre”.