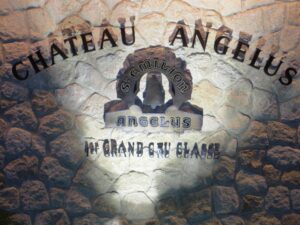 The owners of Chateau Angelus have a long history in the Bordeaux wine region. In fact, the family can trace their Bordeaux roots all the way back to 1400! That is the first time the de Bouard de Laforest family is known to have been in St. Emilion. The story of Chateau is only slightly more recent. It dates back to 1564 when Georges de Bouard began to purchase land in the area. At the time, de Bouard was a Jurat, and a member of the Jurade of St. Emilion.

When the 18th century began drawing to a close, Catherine de Bouard de Laforest began living at a St. Emilion property known as Chateau Mazerat. Next, the Comte Maurice de Bouard de La Forest inherited 13 hectares of vineyard land. The property was located in the section called that is still called Mazerat. This land that was perfect for producing Bordeaux wine was the start of the Angelus vineyards.

Comte Maurice de Bouard de La Forest added additional vines to the property. At the time, the Bordeaux wine vineyards went known as Clos de L’Angelus. Over the years, more vines were added to the vineyard. These were purchased from a myriad of estates, including Chateau Beau-Sejour Becot.

Angelus earned its name from an everyday event. On a daily basis, the people working on their Bordeaux wine vineyards heard the sound of the bells from three local churches. That sound inspired the now famous name of the chateau as well as the logo. 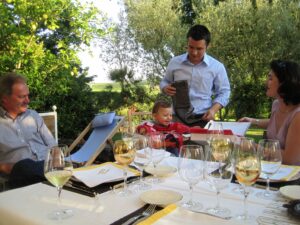 The Right Bank property is still owned by the de Bouard family. Hubert de Bouard is currently in charge of the estate. Managing the Bordeaux wine estate is a famliy affair. All the children participate. Prior to his tenure, Angelus was not making wines as good as their terroir allowed. The estate had a reputation for having made great wines in the 50’s. But by the 60’s, the quality had slipped. 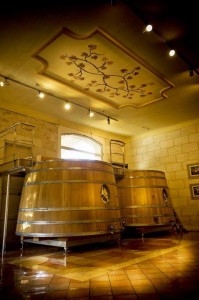 Starting with the 1988 vintage, Hubert began rapidly turning things around. He was one of the first Bordeaux wine makers to embrace fermenting in open top vats and conducting malolactic in small barrels. He lowered yields, increased selection and began aging the wines in new oak barrels. Bouard, a former pupil of Emile Peynaud insists he is making Bordeaux wine at Angelus the way it was made during the 50’s. But with a modern twist.

Shortly after Bouard began running the property, he instituted another change. He changed the name from L’Angelus to Angelus. He said, “This allows the wine to show up first in alphabetized lists.” He was right!

For the 2009 vintage, Bouard added a line of 60 people to manually destem berry by berry. Hubert believes manual destemming helps the berries remain intact, while retarding oxygenation and retaining freshness.

The vineyards total 23.4 hectares. They are located on two soil types, Clay with limestone and clay with sand and limestone that is located on the sloping hillsides. The Bordeaux wine vineyard is planted to 51% Merlot and 47% Cabernet Franc. The remainder is Cabernet Sauvignon. The vines average close to 30 years of age. Vine density runs 6,500 to 7,500 plants per hectare.

The vines are pruned using “Girondine” method, which leaves two canes. Vineyard practices are traditional. Some rows are seeded with grass. Serious vineyard management techniques are practiced including debudding, followed by crop thinning in the summer. They practice green harvesting. Average yields run 30 to 35 hectolitres per hectare for this Bordeaux wine. 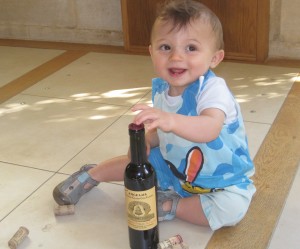 The vine canopies allow the leafs to gain maximum sun exposure. The fruit is hand picked and sorted three times. In the vineyard, again after it’s been destemmed and a final time at the winery. Starting with the 2009 vintage, in Hubert de Bouard’s pursuit to obtain the finest possible Bordeaux wine, he added a line of 60 people to manually destem berry by berry. It’s amazing watching two rows of destemmers, each 30 deep, working on the fruit, one berry at a time. 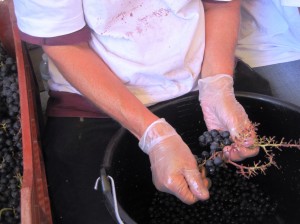 Hubert said, “Manual destemming helps the berries remain intact, while retarding oxygenation and retaining freshness”. Bouard used this method for 20% of the 2009 crop. In 2010, they employed 150 workers to manually destem the grapes. With the additional workers, they came close to hand destemming half their crop! Angelus uses optical sorting technoloogy. To ensure only the top grapes are used, an additional hand sorting will take place after the fruit is put through the optical sorter.

A cold maceration takes place for not usually over 5 days. Fermentation happens in a combination of temperature controlled stainless steel vats, concrete and oak vats at 28 to 32°C. Everything moves by gravity flow. After Malolactic is completed, the wine is aged in 100% new oak for between 18-24 months. The Bordeaux wine is blended following the first summer of ageing