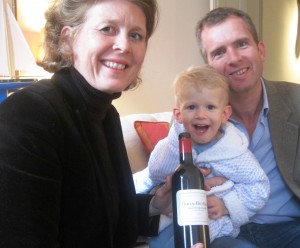 2010 Haut Bailly From 62% Cabernet Sauvignon, 36% Merlot and 2% Cabernet Franc, a blend similar to what they used in 2009, the 2010 vintage is the product of low yields. For a comparison, 2009 was 46 hectoliters per hectare. In 2010, due to the draught and problems with the Merlot flowering, yields were reduced to 37 hectares per hectoliter.  Low yields and weather allowed the wine to reach 13.9 % alcohol, which is slightly higher than the 13.75 the property enjoyed in 2009.

Inky purple in color, with pungent aromas of spice, ash, tobacco and blackberry liqueur, the wine is concentrated, deep, rich and opulent in texture. With palate staining fruit, layers of ripe, velvety tannins and a long, pure, cassis and blackberry finish, this wine offers strong competition for the 2009. Veronique Sanders thinks the 2010 is a better wine.  I am not sure I agree.  But I do know, it’s going to be a lot of comparing 2010 with 2009, 2008, 2006 and 2005 over the next few decades. 94-97 Pts