In 1814, Colonel Charles Palmer arrived in France with the army of the future Duke of Wellington. The owner of the estate at that time was the recently divorced Madame de Gascq. She was trying to sell the estate. When she met Palmer, she told him, “The Bordeaux wine we produce is as good as Château Lafite!” Palmer soon took over the estate.

Palmer believed in the Bordeaux wine he was producing. He began expanding the vineyards. Between 1816 and 1831, the estate acquired more land and buildings throughout the Cantenac, Issan and Margaux sectors.

In 1843, Palmer, now a Major General was forced to sell Chateau Palmer. Emile and Isaac Pereire, two brothers had always wanted to purchase Palmer. They did not come from the Bordeaux wine trade. They were involved in railroad lines and banking. In 1853, they became the new owners of this famed Bordeaux wine property.

The brothers replanted and restructured the vineyards. In 1856, they constructed the legendary château and the Palmer village outbuildings. Due to the phylloxera epidemic, wars and the great depression, the Pereire brothers’ descendants were forced to sell the property.

In 1938, four families of Bordeaux wine merchants joined forces to buy equal shares of Château Palmer; Ginestet, Miailhe, Mahler-Besse and the Sichels, whose descendents are the current owners of the estate. Two of the families left the company, but, for the Mahler-Besses and the Sichels, it remained an affair of the heart. 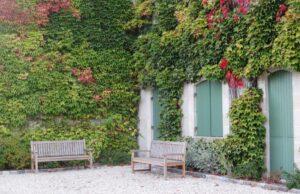 Originally from the Netherlands, the Mälher family were successful in the textile and the wine business. Having settled in Bordeaux with his wife Marguerite Besse, Frédérick Mälher, the founder of the Franco-Dutch dynasty, set out a wine trade. His friends, Sichel, Miailhe and Ginestet convinced him to join them in 1938 in their Château Palmer venture. His son Henry and then Henry’s son Franck headed the negociant Mälher-Besse firm from 1945 to 2007. Today Franck’s sister Stéphanie Faguer has taken over the position.

In 1938, Sichel, aready had his own firm in England, specialized today in the distribution of fine wines, while his brothers had firms of their own in the same business, one in France, the other in Germany. His son Peter, who was as passionate as his father about the business, settled in Bordeaux in 1960, where he married Diana, also from England. Today his sons Allan, James, Charles and David carry on their father’s work at Maison Sichel.

Miaihle had the heavy responsibility of managing the estate during the German occupation. After the tragic events of World War II and the deterioration of the château by German troops, the 1950s saw the regeneration of the vineyard under the management of Jean Bouteiller (1913-1962), the son-in-law of Frédérick Mähler, majority shareholder at the time.

Bouteiller’s son Bertrand took over from him until 2004. Having spent forty-two years at the head of the estate, he essentially devoted his entire adult life to Château Palmer, which reached an apotheosis with the 1961 vintage. In 2004, the shareholders put agronomist and oenologist, Thomas Duroux at the head of Château Palmer. This allowed Duroux to return to Bordeaux.

THE VAT ROOM AND CHAIS

Entirely refurbished in 1995, its 42 temperature-controlled, conical, stainless steel vats are designed to provide optimal conditions for precision wine-making.Château Palmer is equipped with two. The so-called “first year chai,” holds the barrels containing this year’s vintage. Here they stay for the first year of ageing before being replaced by a new harvest and moving on to the recently renovated “second year chai.” Work is once again taking place in the vat rooms. In 2010, Palmer began work on installing a new harvest reception area of 350 square meters which should be finished by 2012. The old pumping system will be replaced by gravity force. They will also build a small cellar devoted to experimental winemaking projects like producing white wine and even vin de paille. A new barrel cellar will allow a vintage to age without being moved. The Palmer village will also be refurbished. 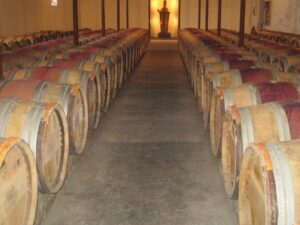 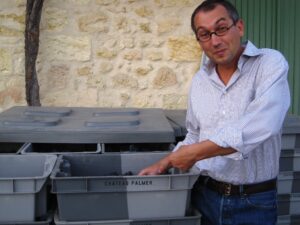 Palmer and its Alter Ego are two translations of the Château Palmer terroir, two interpretations of the variations offered by the climatic conditions of each vintage. Alter Ego made its debut with the 1998 vintage. Because it comes from different plots and different blend than the Grand Vin, Palmer does not view this as a second wine.

Harvesting and vinification decisions are different for each wine. Alter Ego requires grapes that will release aromas of fresh fruit. Final blend tastings confirm the intuitions developed when tasting individual grapes in the vineyard. Alter Ego is put into barrels to age for 18 months. The fruitiness and aromatic intensity are preserved by the use of a moderate percentage of new oak barrels (25 to 40%).

The wine, a blend of 85% Bordeaux from Palmer’s vineyards and 15% Syrah from the Rhone was produced as an homage to a wine that might have been released in the 19th century. The Bordeaux varietal’s are 50% Merlot and 50% Cabernet Sauvignon. Grapes from Palmer are not young vines. They were chosen because managing director, winemaker Thomas Duroux felt they would blend best with the Syrah. The production of the wine depends on the vintage. It was not produced in 2005 as it would taken too much Syrah to overcome the strong Bordeaux characteristics. 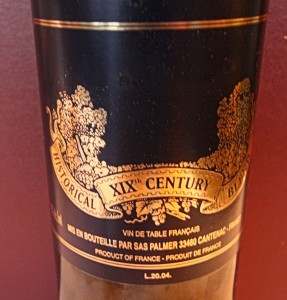 A few interesting points regarding labeling laws in Bordeaux which relate to this wine. Notice, the wine does not say Bordeaux. The wine needs to be sold a Vin de Table as all the grapes do not come from Bordeaux or Palmer. Also, Palmer and their Chateau logo has been removed from their historic label as all the grapes did not come from their estate. As a Vin de Table, the wine does not carry a vintage date. But, when you look at the bottom of the label, please note the lot #… L 20.04 which corresponds to the vintage date, 2004. The top of the capsule reads XIX. In response to the emails and PM’s I received, the alcohol level is listed as 13%.

Palmer produces a sensuous wine of beauty. Everything that makes up a great Bordeaux wine is found in Palmer. Complex aromatics filled with spice, truffle, violets, spring flowers, earth and leather scents. Full bodied and rich, this wine personifies elegance in a Bordeaux wine. When mature, the textures experienced in Palmer are unequaled in other Bordeaux wines. Silk wrapped in velvet, with layers of satin and ripe berries.