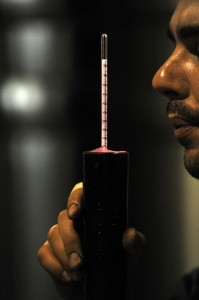 Yesterday, Bordeaux especially the Medoc was slammed by a fierce storm. The heaviest amounts of rain fell in the northern end of St. Estephe. Pomerol and St. Emilion  received less rain than any of the Bordeaux appellations in the northern Medoc.   In Margaux, there was less precipitation than was experienced in St. Estephe or Pauillac. All told, over ½ of an inch covered Margaux during the day. Would the rain upset the harvest plans for Chateau Brane Cantenac?  Chateau owner, Henri Lurton did not think so. “We will be harvesting the Cabernet, Wednesday, October 6, and Thursday, October 7, starting with the great ones on the hillock, which are also the oldest vines”.

A common fear with heavy rain during the harvest is that rot or mildew could develop.  Lurton is not worried about the potential for development of rot. According to Henri Lurton, it is not a major concern for the 2010 Brane Cantenac Harvest at the moment. Lurton explained, “The problem is, the rain really permeated the ground and since the grapes no longer grow and mature, rot could develop, or not. We won’t know for a couple days about the 2010 Brane Cantenac Harvest“. 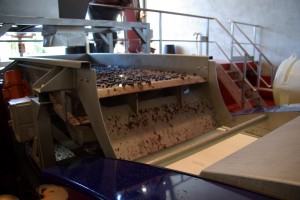 According to Corinne Conroy, Brane Cantenac is using an optical sorting machine for the first time this year.  In 2009, when much of the harvest throughout Bordeaux was in great shape, with uniform ripeness in most places, sorting machines did not play a major role. But with the 2010 Bordeaux wine harvest, they will make a difference.  The trick to producing great Bordeaux wine in 2010 will be the selection.  Brane Cantenac is aware of that. They are making a serious attempt at improving their wine. That choice is easily seen with the extra efforts being spent in the selection process for 2010. 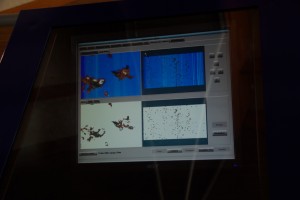 Lurton explained, “The sorting machine is truly a great help this year. The perfect year actually to sort out the undeveloped berries, and the unripe ones too. We discard about 3% of what comes in“.  All of this is already making a difference which can be clearly seen in the dark color and amount of foam visible in the picture. 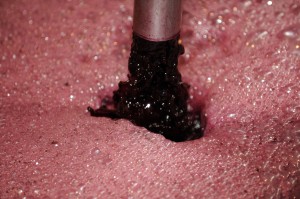 How is the harvest coming along at Brane Cantenac? “According to the results of our berry sampling yesterday, (Monday, October 4) we clearly saw an evolution on the phenolic maturity.  The extractible anthocyanins have gone up to more than 1100mg/l for certain of our merlots, but the skins are a little bit thick still, so that’s why we choose to wait a little bit more for them to thin out”.

What potential alcohol levels is the fruit showing ? We have degrees that surpass 15% potential alcohol. So we are expecting a lot of concentration and richness in the musts (and judging from the intensity and deepness of the color in the musts I think we won’t be disappointed…). The acidity is going down but is still around 2.9 or so, a little bit higher than at the same date last year, yesterday’s and today’s hot weather will help out”. 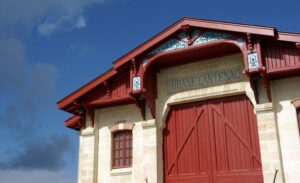 The Wine Cellar Insider would to thank and give credit for the amazing photographs in this article to Sylvain Harrison.