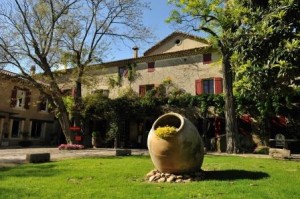 Learn everything about Chateau Cabrieres Chateauneuf du Pape Rhone with wine tasting notes, wine and food pairing tips, best vintages, a history of the property and information on the vineyards and winemaking. If you want to read about other important wineries and wine makers from the Rhone valley: Links to all Rhone Valley Wine Producer Profiles

While the history of Chateau Cabrieres dates back to the fifteenth century in the Southern Rhone Valley, the modern era for the winery begins when it was purchased by the Arnaud family. The estate takes its name from one of the lieux-dits where there vines are planted in, Cabrieres. So far, three generations of the family have manged Chateau Cabrieres.

Prior to 1955, the harvest was sold to negociants. Starting in 1955, Chateau Cabrieres began to produce, bottle and sell their own wine.

Previously, the wine was sold under the name of Domaine Cabrieres, but that changed at some point after the 1960’s when they altered the first part of the name from Domaine to Chateau. Chateau Caberies added to their holdings in 1995 when they purchased another Chateauneuf du Pape estate, Chateau Maucoil, which they later sold.

In 2008, a lawsuit was filed by Carole Arnaud against her father, Guy Arnaud. In the lawsuit, Carole Arnaud claimed that she was owed back wages and more importantly, that Chateau Cabrieres was adding grapes from outside the appellation to their wine. Those claims were proven to be false.

The family then divided their holdings and Carole Perveyrie Arnaud is no longer involved with any of the Arnaud family vineyards in Chateauneuf du Pape. She started her own vineyard with 8 hectares of vines she was given as part of the settlement.

Today, Chateau Cabrieres is owned and managed by Agnes Arnaud and her husband, Patrick Vernier. The wine making and vineyard management is consulted by Philippe Cambie.

Chateau Cabrieres is one of the few Chateauneuf du Pape properties to plant 13 allowable Rhone grape varieties. The combination of 3 distinctive terroirs and 13 varieties allows Chateau Cabrieres to produce a myriad of wines from the Rhone Valley.

Cabrieres Chateauneuf du Pape – A blend of 50% Grenache, 20% Syrah, 20% Mourvedre and 10% Cinsault. The terroir is very rocky, with small stones. The wine is aged in used, French oak barrels for 12 months and then foudres for additional aging.

The production is slightly more than 9,000 cases per year. Until the 1998 vintage, this wine was previously produced as Cabrieres Chateauneuf du Pape Tradition.

Cabrieres Prestige – With at least 50% old vine Grenache that is more than 100 years of age along with, 15% Syrah, 15% Mourvedre and various amounts of Cinsault, Vaccarese, Counoise, Picpoul, Picardan, Clairette, Bourboulenc Muscardin, Roussanne and Terret Noir.

Cabrieres Centenaire – Making its debut in 2000, the wine is made from vines over 100 years of age, the wine comes from a blend of 13 different varieties, although it’s dominated by old vine Grenache. The wine is aged in mostly used, and some new French oak barrels for 18 months. The wine is only produced in the best vintages. The production is on average 400 cases per year.

Cabrieres Le Grand Rocasson – The wine is made from a blend of 80% Grenache and 20% Syrah.

Chateau Cabrieres Blanc is made from a blend of 40% Grenache Blanc 40% Clairette, 10% Bourboulenc and 10% Roussanne. The wine is aged for 4 to 6 months in new, French oak barrels before bottling. The production is about 500 case per year.

Chateau Cabrieres Blanc Prestige is produced from 30% Grenache Blanc 30% Clairette, 30% Bourboulenc and 10% Roussanne. The production is about 175 case per year.

Cabrieres Lettre a Louis Arnaud – From mostly 100% Old Vine Grenache with minor amounts of other varietals added on occasion. The vines used to produce this special wine date back to between 1900 and 1902!

Part of the reason Cabrieres Lettre a Louis Arnaud was so good is that the wine is made from naturally low yields that are close to 10 hectoliters per hectare. The wine was only produced in 2000 and 2001 and was made for export to the American market.

Chateau Cabrieres can be enjoyed on the young side. Young vintages can be popped and poured, or decanted for about 1 hour, give or take. This allows the wine to soften and open its perfume. Older vintages might need very little decanting, just enough to remove the sediment.

Chateau Cabrieres is usually better with 3-5 years of bottle age. Of course that can vary slightly, depending on the vintage. In the best vintages the wine should be consumed within 4-15 years after the vintage.

The white wine of Cabrieres is best served with a myriad of different seafood dishes, shellfish, crab, lobster, sushi, sashimi, chicken, pork and veal, as well as Asian cuisine.

Chateau Cabrieres also owns 5 hectares of vines in the Cotes du Rhone appellation where they produce both red and white wine.