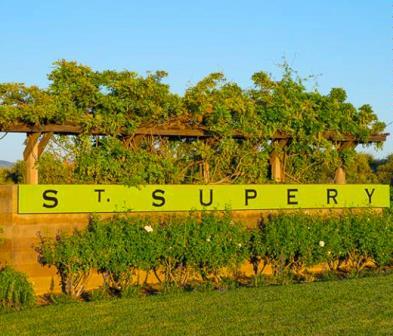 St. Supery, located in Napa Valley, in the Rutherford AVA was first purchased by the Skalli family in 1982. While their first foray into the Napa Valley was relatively recent, the Skalli family has been involved in the wine industry since 1920. They started out producing wine in Algeria before expanding into Corsica with the Terra Vecchia winery in 1961, and then later into Northern California.

At the time of the original purchase of Saint Supery, the large estate included 1,530 acres in the Napa Valley. While much of that land was used for cattle ranching, the deal included 500 acres of fully cultivated vineyards. Those vines are where they get the fruit for their Dollarhide Estate Vineyard wines today. The Dollarhide vineyards ranges in elevations from 600 to 1,100 feet. The vineyards are planted to all the major Bordeaux varietals.

3 years later, in 1985, under the direction of Robert Skalli, they added 56 more acres of vines located in the Rutherford appellation. The alluvial soils, with sand, clay and loam are planted with red wine, Bordeaux varieties.

In time, that purchase became their new headquarters. After years of construction, St. Supery officially opened their new winery in 1989. St. Supery is committed to self sustainable vineyard techniques and using solar generated power when possible for all their vineyards and winery operations. They were one of the first estates in the Napa Valley to use optical sorting technology. For a period time, St. Supery brought in Michel Rolland to consult on their wine making and vineyard management. He has since left the estate.

While St. Supery produces a wider array of wines in various price ranges, their top wines are:

St. Supery wines are best served at 15.5 degrees Celsius, 60 degrees Fahrenheit. The cool, almost cellar temperature gives the wine more freshness and lift. Young vintages of their red wine can be decanted for 1-3 hours, depending on the character of the vintage. This allows the wine to soften and open its perfume. Older vintages might need very little decanting, just enough to remove the sediment.

The white wine of St. Supery is best served with all types of seafood and shellfish, sushi, sashimi, chicken, veal, pork and cheese.

In late 2015, St. Supery was sold to the Chanel Group. The Chanel Group is well versed in running wineries as they own two leading chateau in Bordeaux, Rauzan Segla, a Second Growth in the Margaux appellation and Chateau Canon, Premier Grand Cru Classe in St. Emilion.

It is expected that the team already in place that is in charge of the production, sales and distribution of the wines from St. Supery will remain in place. The 2015 harvest has just finished in the Napa Valley and in Bordeaux. While the vintage is thought to be of good quality in California, the yields were small. In Bordeaux, 2015 is already being talked about as being of very high quality.

It will be interesting to see how this purchase becomes incorporated into the other wine and winery assets owned by the Chanel Group. For example, the Chanel group owns a large Bordeaux Negociant, Ulysse Cazabonne. With this obvious symmetry, it’s possible that this will lead to the availability of St. Supery wines for sale on the Place de Bordeaux. That could be a great decision as that would only lead to more international recognition to the St. Supery brand.