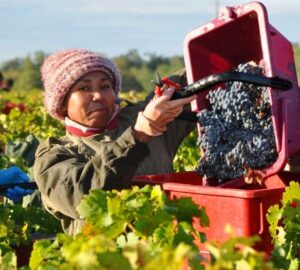 During the harvest season, Alexander Van Beek is busier than a one armed paper hanger. Frequent flyers covet the amount of miles he racks up jetting between Bordeaux and Tuscany. Alexander van Beek is in charge of Caiarossa in Tuscany as well as two 1855 Classified Bordeaux chateau in Margaux, Chateau Giscours and Chateau du Tertre.

Jeff Leve With the harvest over and all grapes brought in, what are you doing with the vinification for 2012 Giscours?

Alexander Van Beek “We made the choice to do a gentle extraction. For the 2012 Giscours, the extraction was done with slightly low fermentation temperatures because we needed to preserve the fruits and not harden the structure of the wine.”

Jeff Leve We’ve heard from numerous vintners who feel 2012 Bordeaux shares commonalities with 2008 Bordeaux.  Is that your view?

Alexander van Beek “It’s hard to answer that question because  no vintage is exactly alike any other year. But maybe, the 2004 or 2006 vintage.

Alexander van Beek “The Merlot is very good, rich in flavors, opulent and fruity. The Cabernet Sauvignon is dense and elegant with a very fine tannic structure.”

Jeff Leve What was the most difficult or stressful part of the growing season this year for 2012 Giscours?

Alexander van Beek “A pretty high risk of mildew developed at the end of spring. But that was quickly taken under control and had only installed itself on some of the leaves. On the other hand, the rains in June were an issue due to millerandage which attacked some of the Merlot.”

Jeff Leve What about issues that came up later in the 2012 Bordeaux growing season?

Alexander van Beek “Like every year, we always wait for the optimal maturity to start with the harvest. So we have to wait but not too long to avoid any rot. The rain we had during the end of September didn’t help as the tropical conditions were favorable for the development of botrytis. However, we succeeded in harvesting everything with a minimum amount of rot because we already made sure to there was a strict selection in the vineyards.”

Jeff Leve Did the late season drought hinder the development of the 2012 Giscours fruit?

Alexander van Beek “Drought has been a known problem for the most recent vintages. The vines did not suffer during spring and the early summer. We had sufficient rainfall and the climate was generally mild. Therefore the grapes were able to develop perfectly. The veraison was late this year. During the growing season, by far, August was the hottest, and by far the driest month. The vines weren’t stressed like they were in 2003, but they experience a single raindrop in August and suddenly the ripening process was slowed down or even blocked in some cases. Due to welcome rainfall in September, veraison was able to continue. The real challenge was being able to wait and be patient to achieve a slow and late maturity. This drought remains a recurring challenge for the next vintages and even for the short term future of viticulture in Bordeaux.”

Jeff Leve With that in mind, which terroir performed best during the 2012 Giscours growing season?

Jeff Leve When did you start and complete the 2012 Giscours harvest?

Alexander van Beek “We started harvesting the Merlot September 27. We finished with the Cabernet Sauvignon October 18, which was day after we completed picking at Chateau du Tertre.”

Jeff Leve Did the rapid change in weather cause you to change your plans, with the picking dates?

Alexander van Beek “The low temperatures moved in on October 10. This allowed the grapes to retain good health. We cannot say that we finished the harvest earlier than we anticipated because to us, what matters the most, are grapes with an optimal maturity. Therefore, it’s the date at which the harvest starts that is the most important. Then we must harvest as fast as possible and in the best conditions. The date at which the harvest ends is never anticipated at the beginning of the harvest. It is always confirmed just a few days before it’s there. So, we followed the plan for the collection of the grapes to the best respect of the maturity of the grapes. “

Jeff Leve Did any specific grape variety perform better than the others this year?

Alexander Van Beek “This year, our Merlot turned out great and the Petit Verdot is surprisingly good, because of its complexity and excellent balance.”

Jeff Leve How many pickers did you bring in to work the 2012 Giscours harvest?

Alexander van Beek “For the 2012 Giscours harvest, we needed a team of 140 pickers to complete the work.”

Jeff Leve Was this the first time you used optical sorting at Chateau Giscours?

Jeff Leve What are your yields with the 2012 Giscours?

Alexander van Beek “For the 2012 Bordeaux vintage, we are between 40 to 45 hectoliters per hectare with Chateau Giscours.”

Jeff Leve What are your alcohol levels with the 2012 Giscours?