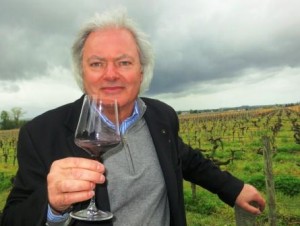 Jeff Leve What’s new with you at Chateau Angelus?

Hubert de Bouard “We purchased 2 hectares of Merlot located near Canon and Beausejour Duffau. Those vines could be included in Angelus in 2013 or 2014, if all goes well.”

Jeff Leve That gives you a little bit more Merlot than Cabernet Franc for the 2011 Angelus. Is that what you want?

Hubert de Bouard “The goal for our St. Emilion vineyard is to get to an even balance of 50% Cabernet Franc and 50% Merlot in the vineyards.”

Jeff Leve Which variety was more successful for you in 2011?

Jeff Leve Some chateaux have stated they have higher tannin levels in their 2011 wine than they showed in 2009 or 2010. Is that the case with Angelus or Bellevue?

Hubert de Bouard “We have less tannin levels in our wines this year than we had in 2010.”

Jeff Leve What were you looking for when you decided to harvest your 2011 Bordeaux wines?

Hubert de Bouard  “We were seeking a good balance between  acidity and fruit.”

Hubert de Bouard  “Yes. Because as you know, in 2011, the seasons were reversed.  We also had lack of sunshine in the summer, and it was dry.”

Jeff Leve If you had to pick one decision you made that helped you with your 2011 Bordeaux wines, what would it be?

Jeff Leve What do you do with your Cabernet Sauvignon?

Houbert de Bouard “We have a small portion of Cabernet Sauvignon in the vineyards. We add it to the blend from time to time.”

Jeff  Leve What are your oldest vines?

Hubert de Bouard “Our oldest vines are Cabernet Franc. Some of those vines are more than 60 years old.”

Jeff Leve How old do you allow them to get before they no longer offer enough fruit?

Hubert de Bouard “They can get to about 70-75 years of age before they need to be replanted.”

Jeff Leve What are you doing with all the construction at Angelus?

Hubert de Bouard “We’ll have a new reception area and we’re adding a new cold room along with reverse conical vats like you saw at La Fleur de Bouard.  We’ll have 2 -3 vats that should be 60-65 hectoliters each.”

Jeff Leve When do you hope to be finished with the project?