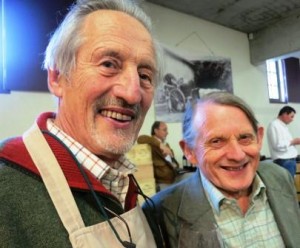 Tasting young Bordeaux wine in barrel is an art.  To gain a good understanding of the wines and the region, you need to taste a lot of Bordeaux wines, especially if you want to barrel taste in Bordeaux .

The key to tasting Bordeaux wine in barrel is not how the wines show today. The art and ability of the taster is to prognosticate what this baby of a wine is going to be when it grows up and matures.  That is not as easy as it looks.  Barrel tasting takes focus, concentration, the ability to withstand a lot of tannin and most importantly, experience.

The 10,000 rule of thumb is reasonable.  If you do anything 10,000 times, you are going to be good at it.  The two gentlemen in the picture have more than 100 years of combined experience in tasting young Bordeaux.  I spoke with them today at the Ulysses Cazabone 2011 Bordeaux futures tasting.

Both gentlemen work with the team at Farr Vintners.  Farr has been in business since 1978. Headed up by another strong taster, Stephen Browett, Barry Phillips and Derek Smedley are two more reasons Farr is one of the world’s largest and most successful traders of Bordeaux wine.

Think about both these guys.  Derek Smedley, MW has been coming to Bordeaux at barrel tasting since 1961!  That is longer than most people reading this have been alive! Barry Phillips, the walking Bordeaux encyclopedia, has been tasting Bordeaux wine since 1952.  These guys recall what wines like 1947 Cheval Blanc tasted like in its youth.  It was undrinkable according to Phillips who said it reminded him of Vintage Port in the early 1950’s.  Today, he agrees it is one of the greatest wines ever made. What does that mean for Bordeaux wine made today?

Sadly, we were all busy tasting 2011 Bordeaux wine.  With purple teeth and black lips, we spoke for a few minutes about the past and presents wines of Bordeaux. 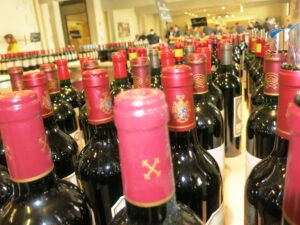 I did not have time to write down who said which of the following comments. But they were in close agreement.

What is the biggest difference between Bordeaux wine made today, and the wines of the past?

“The biggest change in Bordeaux wine making today is, there are no more bad vintages.  Bordeaux will never experience another dreadful vintage like 1969, 1972 or 1991. Technology, vineyard management techniques and the money needed to make the best wines possible are available to Bordeaux wine makers today. This did not exist in the past”.

What do you think about rising alcohol levels in Bordeaux today?

“Bordeaux wine, like all great wine, is not about numbers.  People need to pay more attention to what’s in their glass.  Consumers should not bother with numbers and labels. A balanced wine is a balanced wine, regardless of the level of alcohol.  The same thing is said for unbalanced wines at low alcohol levels”.

Having tasted more, older vintages than most people, do you think Bordeaux wine today resembles Bordeaux wine made for previous generations?

“Yes.  There is a consistent thread that runs through all the great Bordeaux chateaux today”.

What has changed the most about the en premieur tastings that took place prior to 1982?

“When we used to go to Bordeaux prior to 1982, we arrived in May or June and tasted what we wanted, when we wanted. Owners were thrilled to see us!  There was no hurry to place orders. You tasted, thought about it and made up your mind when you got around to it. There was no urgency.  The wines were not in bottle yet, so it did not matter”.

Looking around the room, with dozens of tasters lined up to taste 2011 Bordeaux, (one day prior to the official week of futures tastings), clearly, that is one part of the Bordeaux wine world that has not changed for the better.

Derek Smedley and Barry Phillips are sharp as a tack, fun and have more stories to share than I can count.  The next time I am in London, if they have time, I know who I hope to have dinner with.