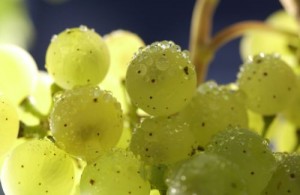 The 2011 German Vintage meets and beats all expectations in terms of quality and quantity. This is a very good thing for thirsty consumers! For wine lovers fond of German wines, you will be thankful for these, magic sweet Rieslings at our disposal in the coming months.

The 2011 harvest in Germany is similiar to other European wine growing regions like Bordeaux. It was a curious year of weather extremes that brought great anxiety and fantastic harvest results.

Whether the vintage will be in line with legendary vintages like 1811 and 1911, remains to be seen.  The sweet Rieslings showed a stunning density and body. There was a subtle fruitiness. The wines are in balance and offer  gorgeous drinking pleasures.

The weather in 2011 brought wine-growers many a surprise. After overcoming great challenges, they were rewarded with strong positive results.  Following an exceptionally early bud burst in mid-April, a cold snap one night in the first part of May sufficed to cause not inconsiderable frost damage in low-lying sites.

In general, the weather in March, April, and May was more like that of early summer, with temperatures some 3°C (5.4°F) higher than the long-term average – a value that has been topped only once during the past century. Due to the warmth, blossoming in the Rheingau had already begun by late May, and growth was more than three weeks ahead of schedule at that time.

If spring was marked by too little precipitation, summer rains more than made up for the deficit. As a result, however, temperatures did not drop; they remained higher than the long-term average. Extremely early blossoming and favorable weather during summer led to a phenomenon at the beginning of August: the start of veraison – the earliest since time immemorial. The weather during this phase of ripening was not ideal: it remained damp and warm from mid-August until well into September. Growers could envision pending disaster (onset of rot) even though both grapes and vineyards were still in perfect shape.

In mid-September – just in time – the weather improved. It remained dry until the end of October, and conditions were ideal for harvesting. Justifiably, one can say that the ripeness of this year’s crop was exceptional. Although fantastic analytical values confirm this, the actual taste of the grapes in the vineyard was even more telling. From the very first day of picking, ripeness was perceptible to the taste. Once again, our crop in the Turmberg and Gräfenberg sites enabled us to produce wines of every quality level, up to and including Trockenbeerenauslese. We also achieved record Oechsle readings in 2011: 265° degrees in Turmberg and 301° in Gräfenberg.

The young wines are extraordinarly compact, with brilliant aromas, thanks to the perfectly ripe condition of the grapes at harvest. We’re especially pleased, though, that the wines of 2011 are not only powerful and compact, but also reveal their play and elegance through a subtle fruitiness. Despite high levels of ripeness, we were able to preserve the aromas and mineral notes typical of our cool-climate, hillside sites. Uncompromising selection during the harvest blessed us with a tremendous vintage that will surely join the ranks of its predecessors from the “comet years” 1811 and 1911. In any case, people will be talking about vintage 2011 for generations to come.

According to the VDP german yields averaged ca. 50 ha/hl, even higher in regions spared from frost and storms with an overall of ca. 80% of an average year and considerable more than in 2010.

I had the chance to taste barrel-samples of the 2011 vintage by the famous German estate R. Weil from the region Rheingau.  This is not  hype. The vintage 2011 is really an exceptional vintage for sweet 2011 German Rieslings. 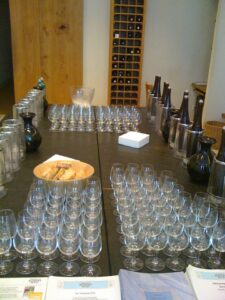 Amazing. Shows a wonderful density and body, play, subtle fruitiness and a certain lightness of being. I promise you the bottle will be empty sooner than later!

2011 Gräfenberg Riesling Spätlese
Too heavy at the moment. Lacks of acidity and play

2011 Gräfenberg Riesling Auslese
Nectar of the gods. Even a touch sublimer that the previous Auslese.

2011 Gräfenberg Riesling Beerenauslese
Too young to judge.  A wine for our grandchildren.