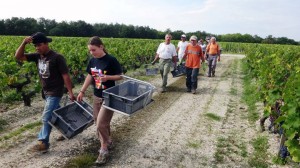 The 2011 Bordeaux vintage is a difficult and heterogeneous year.   Each property is experiencing the vintage in a different way. They all have their own set of unique problems and virtues with the grapes in their Bordeaux vineyards.

JL: What was the 2011 Malartic Lagraviere Bordeaux growing season like for you?

JJB: “2011 Malartic Lagraviere was quite atypical. It had us change of mood a few times. We are happy and confident because of the quick growing of the vines and homogeneous flowering. We were also stressed because of the fear of the impact of the drought on the vines and the grapes. We’re happy because the rains came at the right moment. We were again stressed because of a variable climate until almost the end of August. And now we’re happy again because of the nice back season we’re having and the forecast for the next days. I hope we’ll stay in this good mood until the end of the harvest”!

JL: How are things with the 2011 Malartic Lagraviere Pessac Leognan harvest for you at the moment?

JJB: “We had a drastic change in the last 3 weeks. We feared a difficult harvest period because of the very dry 4 months between the middle of March until the middle of July. Then we received 50 to 60 mm of water between middle of July and middle of August. The last 3 weeks have helped the grapes to ripen and they are now are finishing to take the berries to a very nice expression. We have thin skins and very expressive aromatics for the Merlot”.

JL: What about your Cabernet Sauvignon and Petit Verdot?

JJB: “The climate forecast now brings a smile to our faces for the cabernet and petit verdot”.

JL:  What date did you start harvesting your 2011 Malartic Lagraviere?

JJB: “We started harvesting Sauvignon Blanc, the 23 of August. Merlot began being picked September 13 and we waited for the Cabernet Sauvignon until September 26”.

JL: Is this your earliest harvest on record?

JJB:  It’s not the earliest Bordeaux harvest for us. But it’s not far from it. The earliest was in 2003 when we picked sauvignons the 19th, the merlot the 9th of September and the 23rd for the cabernets”. 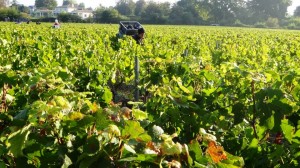 JL: When you harvest early, at Malartric Lagraviere, what does it do to the style of your wines?

JJB: “It depends pretty much on what happens during the entire vegetative period. What is “passionating,” as much as stressful is, that the cocktail of what happens is never the same. The only thing we’re sure is, the earlier the vintage is, the bigger the chances are to harvest in sun shining conditions”!

JL: What are the biggest challenges you’re facing with your 2011 Bordeaux harvest?

JJB: “We still have most of the grapes outside, but on the whites the number of “tries successives” has been much bigger than usual, and so far in the merlot, the selection inside of the plots is much higher. All this because drought made that slight little differences of terroir created different reactions of the vines and this has to be considered to associate the grapes and then “vinificate” them the most adapted way”. 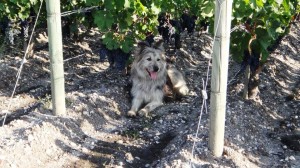 Q: What specific choices will you need to make during the vinification for your 2011 Bordeaux wine?

JJB: The skins are so thin, we won’t have to be very energetic to extract. At reverse we’ll be very smooth and see how it goes”.

JL: Can you please share some technical information? What are your potential alcohol levels, pH numbers and IPT numbers from your first vats?