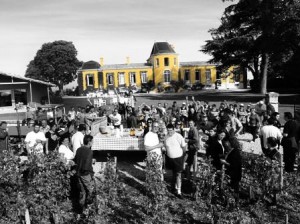 Chateau Lafon Rochet in St. Estephe has gone through numerous changes over the last 2 decades. In 1999, Michel Tesseron, took over managing the estate. It was his decision to repaint the chateau the now, famous, sunflower yellow color. It was also his choice to place the young Basile Tesseron in charge of the property.

Lafon Rochet owns 40 parcels of vines in the Bordeaux appellation of St. Estephe. To make the most of those 40 parcels, the estate now uses 40 stainless steel, temperature controlled vats allowing for a parcel by parcel vinification. These changes have added a lot to the fortunes of Lafon Rochet. Basile Tesseron discussed what is taking place at Lafon Rochet with the 2011 Bordeaux vintage.

Jeff Leve: How does 2011  Bordeaux compare with the more recent vintages you have experienced at Lafon Rochet?

Basile Tesseron: “Well it definitely is not 2010 or 2009. It is simply another vintage. We are going to have the smallest production ever at Lafon Rochet! I’ve been tasting some of the fermented vats in the morning. Is it good? Is it great? You’ll tell me in a few months when you taste the wine in April”.

Jeff Leve: What was it like during the harvest of the 2011 Bordeaux vintage in St. Estephe?

Basile Tesseron: “2011 as the most difficult vintage I ever had. We call it the “Nerves war”. Every single day, we chose to pick differently. Most of the opinion we gathered from the various consultants was: They wanted to be helpful. But with the 2011 Bordeaux vintage, they just don’t know how to help”.

Jeff Leve: T2011 Lafon Rochet got off to a difficult start for you with an unexpected, ferocious hail storm.  What percentage of your vineyards were damaged by the September hail storm?

Basile Tesseron: “100% of the estate was damaged.  Fortunately on September 2, the day after the hail, the temperature went up to 40 c. The botrytis and the rot that could have damaged the quality of the grapes, disappeared with that kind of heat. We were lucky”.

Jeff Leve: When did you start harvesting your 2011?

Basile Tesseron: “We began Saturday afternoon, September 3. Then we needed to wait for almost a week. The serious picking started Thursday, September 8”.

Jeff Leve: Do you remember an earlier vintage?

Basile Tesseron: “In 1999 we started harvesting a single plot August 31. But that was by accident. It was a mistake”.

Jeff Leve: What happened this year with weather?

Basile Tesseron: “The buds opened quite early due to the drought and an early spring. The flowering was quite homogenous.  We had plots of Cabernet Sauvignon in full flower at almost the same time as some of the late Merlot. The veraison turned up the same. In June, the weather was warm and without any rain. The vines stopped growing. The vines suffered from this lack of water”.

Jeff Leve: Did you receive rain in July?

Basile Tesseron: “While it was raining in south of Bordeaux, it was totally dry up north. At other times, it was raining in the Medoc while the sun was up and bright in Bordeaux. I do not know what game mother nature wanted to play with us, but she really made sure it was going to be difficult with the 2011 Bordeaux vintage”.

Jeff Leve: Do you use satellite imagery or optical sorting?

Basile Tesseron: “No we don’t. We mainly use common sense. Which is the most useful tool in a Bordeaux vintage like 2011”.

Jeff Leve:  With the damage from the hail storm, draught and problems with rot, what type of yields did you receive from the 2011 vintage?

Basile Tesseron: “Some of the wine is still in tanks macerating at the moment. But so far we should reach 30 hectoliters per hectare”.

Jeff Leve: Now that you are already deep into the fermentation process, what specific choices are you making for the 2011 Bordeaux vintage?

Basile Tesseron: “We did not conduct pre fermentation at cold temperature. The alcoholic fermentation began quite fast. There was no need to wait. We have only been using peristatic pumps to do the pumping over. This might help with the kind of grapes we have to work with”.

Jeff Leve: We know this is still very early, but at this point, what vintage does 2011 remind you of?

Basile Tesseron: “I have no idea. Even my father does not know. We have never had hail two weeks prior to the picking. So we’ll see”.