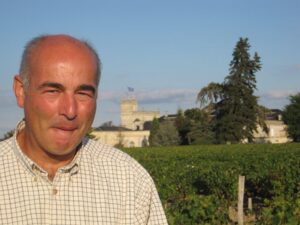 Chateau Ducru Beaucaillou St. Julien, Bordeaux wine producer profile, with a history of the property, plus information on their wine making techniques and their terroir, along with wine tasting reviews and links.

Many Bordeaux wine properties take their name from previous owners. That is only part of the story with Chateau Ducru-Beaucaillou. This estate found part of their name from their terroir due to the fact that is covered with large stones. Beaucaillou is translated into beautiful stones.

Chateau Ducru Beaucaillou is one of the oldest Bordeaux wine properties in the Medoc. History dates the estate to the start of the 13th century. As a working Bordeaux wine vineyard in St. Julien, the Bergeron family was in charge of the chateau from 1720. Bertrand Ducru purchased the estate in 1795. He added his name to the winery which became known as “Ducru-Beaucaillou”.

Ducru hired the well known Parisian architect, Paul Abadie to work on the chateau. Abadie morphed it into a charterhouse in the Directoire style. He added a floor and an elegant façade. This afforded a great view that overlooks the eastern bank of the Gironde river. Bertrand Ducru also invested heavily in the Bordeaux wine vineyard and the barrel cellars. Those efforts helped Ducru become ranked as a Second Growth in the 1855 Classification. 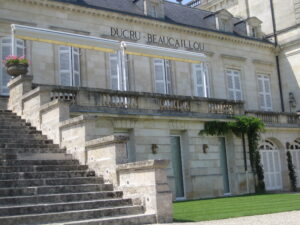 After seventy-one years of ownership, the Ducru family sold the estate. Lucie-Caroline Dassier bought the property in 1866 for one million francs. Dassier was the wife of the famous Bordeaux wine merchant , Nathaniel Johnston. Johnston inherited the family business set up by his ancestor William, who arrived in Bordeaux in 1743. Descended from the Scottish Hartfield family, the Johnstons, Marquesses of Annandale, emigrated from Ireland in 1640. Johnston replanted the vineyards and carried out extensive work cellars with help of Ernest David, the estates manager. They studied the vineyards and carried out several experiments on varietals and vine diseases. 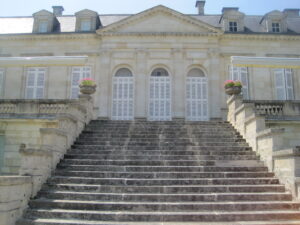 Prior to their efforts, it was common for many Bordeaux wine vineyards to suffer an attack of mildew without cure. Thanks to their efforts, in 1878 he and David perfected a solution blending lime milk and copper sulphate. This became known as bouillie bordelaise, or Bordeaux soup. This remedy was quickly adopted by vineyards all over the world!

Two years after the death of his first wife, Lucie-Caroline, Nathaniel married Princess Marie Caradja of Constantinople, the daughter of Prince Constantine of Turkey. Wanting to make Ducru-Beaucaillou a showplace, Johnston hired MichelLouis Garros, an architect and native of Barsac, which is located next to Sauternes. He was also a graduate of the Ecole des Beaux Arts in Paris and winner of the Prix d’Architecture in 1887. Garros built two Victorian towers on the northern and southern flanks of the former charterhouse and added two wings to give the building a more harmonious and majestic U shape.

Due to the worlwide wide depression in 1929, the Johnstons were forced to sell the chateau. The Desbarats family purchased the property. Desbarats was a Bordeaux wine merchant from the Médoc. After only twelve years of owenership, he sold the estate to Francis Borie, another Bordeaux wine merchant from Corrèze. At the time, Borie was an experienced vineyard owner with property in Pauillac.

Today, Chateau Ducru Beaucaillou is producing some of the finest wines they have ever made. Much of that credit goes to Bruno Borie, a descendant of Francis Borie and the current proprietor.

The 75 hectares of the Château Ducru-Beaucaillou vineyard are planted with 70% Cabernet Sauvignon and 30% Merlot. The average age of the vines is 35 years. With age, the vines become less fertile and at the same time develop a deep root system, up to 6 metres deep.

The high plantation density (10,000 vines per ha.) has many advantages. It reduces the production of each plant while creating competition between the vines that will search deeper down into the soil to find their nutriment (“vines must suffer in order to produce”). It also generates a microclimate with many an advantage : Maximizing the leaf surface per hectare and therefore the rainwater consumption which are particularly profuse in our Atlantic climate Creating ideal conditions for the grapes Vine management, while traditional (double Guyot pruning etc.), includes the latest viticultural techniques (manual leaf-thinning, green harvests in summer etc.). In short, at Ducru the four golden rules are: plot-based management, controlled yields, optimised vine stocks lifespan and sustainable phytosanitary treatments.

Chateau Ducru has a unique micro-climate with considerable advantages: Consumption of rainwater, which is always abundant in this atlantic climate, is maximized (evapotranspiration). Variations in temperature are reduced at grape level by restricting wind circulation. Night-time frosts are minimized as the heat stored by the pebbles during the day is kept close to the vine stock. The ‘layer’ effect of the pebbles on the grapes is optimized as grapes are packed tight, etc. The various plots are planted according to topography (east/west or north/south), improving drainage of rainwater. Since phylloxera ravaged the French vineyards at the end of the 19th century, systematic grafting was introduced, combining ancestral varieties of each region with American rootstock. Since then, intense research on selection and cross-breeding carried out on both stock and varietals has resulted in a large range of options open to wine-makers to help them adapt to the constraints of their terroirs and meet quality standards. In the Ducru-Beaucaillou vineyard, they use the 3309, riparia gloire and 101-14 rootstock. 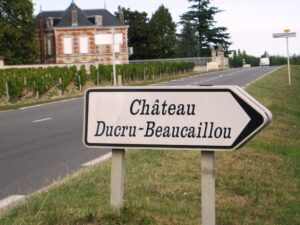 Traditional Médoc double-pruning methods are used to control production and optimise the distribution of grapes along the wire, thus ensuring improved and more homogenous maturity while minimising the risk of Botrytis bunch rot. They adapt this pruning technique to each varietal, the age of each plot, the vigour of each plant and overall quality. 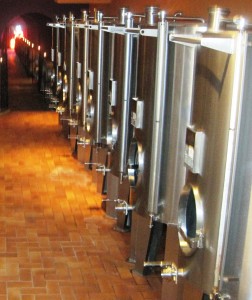 The grapes are harvested manually. They are sorted in the vines on mobile tables to avoid meshing the unhealthy with healthy grapes during transport to the vat room. The vinification of each plot is done individually. Moreover, the fermentations are carried out separately and customized to take account of terroir, grape variety and vintage characteristics. They generally operate gentle extraction and keep the must at traditional temperatures with moderate lengths and frequencies of pumping-over. The press drains off continuously into barrels to facilitate the selection of the press-wine batches.

Malolactic fermentation is conducted in vats. Blending takes place during the first racking operation; for La Croix de Beaucaillou, between 20 and 40% of new barrels are used according to the richness of the vintage. The wine is matured for 12 months. The property uses 5 different cork makers. Ducru Beaucaillou is at the top of their game these days. The wines produced today offer intense concentration of flavors, ripe tannins, supple textures, the structure to age and a unique sense of harmony, that is only found in the best Bordeaux wines.