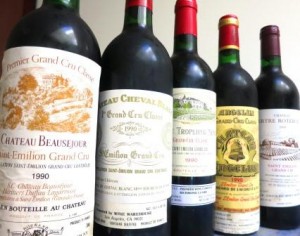 1990 Bordeaux Wine Vintage Summary with harvest information, vintage characteristics, buying tips and links. If you are seeking more in-depth information on anything and everything related to the Bordeaux wine region please see the: All About Bordeaux Wine Guide

1990 Bordeaux wine remains one of the top vintages of the 20th century. All great Bordeaux vintages spring from hot years and the 1990 Bordeaux vintage was no exception. In fact, it was the second hottest year of the century. Only 1947 was warmer. 1990 also offered vintners more sunlight as well. The year was only surpassed by 1949 for the amount of sun the grapes received. Interestingly, 1990 set another second place record. It was the second wettest year on record for a hot vintage. Only 1989 surpassed it for rainfall.

The 1990 Bordeaux growing season got off to a good start following a pleasant winter and cool spring. May was warm, sunny and dry. This pushed the flowering to take place even earlier than in 1989. July and August were dry and hot months. In fact, at the time, August 1990 was the hottest August on record. Only 1928 reached higher, average temperatures for the month of August. While hot, the growing season was not dry, especially in September. The lack of rain during the summer made for the driest summer on record since 1961. Finally some needed rain fell at just the right time. There was a huge storm that struck on September 15. Most of the rain fell on Pessac Leognan, but no appellation was spared. Similar to what happened in 2009, producers claim the rains fell at the perfect moment. The moisture allowed the grapes to reach higher degrees of ripeness while increasing their sugars and potential alcohol levels. The 1990 Bordeaux harvest claims the record for the earliest start date of any vintage during the decade, September 12.

Pauillac is interesting. The top 1990 Bordeaux wine in Pauillac did not come from the First Growths. Lynch Bages and Pichon Baron lead the parade, followed by Grand Puy Lacoste. All three of those wines are better than the First Growths. With time, a lot of 1990 Bordeaux wine has become far too expensive for most people. However, savvy consumers can find well priced, mature wines from the vintage with not that much difficulty. Dry white Bordeaux wine was also quite successful in 1990.

The following list of Bordeaux wines represent the wines offering a high ratio of price and quality for the vintage: 1990 Best Bordeaux wine for the money today

Most of the wines are now reaching full maturity. If well stored, they should remain at this level until at least 2025, before slowly declining. 1990 is also a great vintage for Sauternes. It was final year in a trio of sublime years for sweet Bordeaux wines. Most tasters notice the high level of sweetness found in 1990 Sauternes, as they should.  1990 Sauternes was analyzed as possessing the highest levels of sugar recorded since the 1929 Bordeaux vintage! In Sauternes and Barsac, it was also a large crop. Yields at some estates were the largest since 1893. The sweet white, Bordeaux from Sauternes continue to age gracefully, adding character and complexity as the years go by.