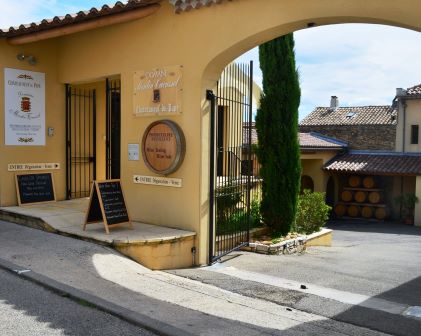 Learn everything about Domaine Moulin Tacussel Chateauneuf du Pape with wine tasting notes, wine and food pairing tips, best vintages, a history of the property, information on the vineyards and winemaking. If you want to read about other important wineries and wine makers from the Rhone valley: Links to all Rhone Valley Wine Producer Profiles

The birth of what we know of as Moulin Tacussel in the Southern Rhone Valley today came from the Tacussel family. The Tacussel family were also responsible for founding Clos Saint Jean. At the time the estate was created, it was simply known as Domaine Tacussel.

That all changed in 1976 when the vineyard was sold by Henri Tacussel to Robert Moulin in 1976. Robert Moulin added his name to the property and Domaine Moulin Tacussel was born.

However, it took almost a decade before the new owner began to produce, bottle and sell their own wine. The debut vintage for Moulin Tacussel came with the 1985 vintage.

On average, the vines are close to 45 years of age. However, they have a small parcel of vines that are more than 110 years old, which was planted back in 1904.

Domaine Moulin Tacussel Chateauneuf du Pape is a blend of 75% Grenache, 10% Mourvedre, 10% Syrah and 5% assorted varieties that include Cinsault, Counoise, Muscardin and Vaccarese.

The terroir is rocks, stones, sand and limestone soil. The vines are planted in the Colombis, Mont Pertuis, Mourre de Gaud and le Palestor lieux-dits. The wine is aged in a combination of foudres, tank and used French oak barrels for 12-14 months before bottling. The production is on average 1,000 cases.

Domaine Moulin Tacussel Hommage a Henry Tacussel is most often a blend of almost 100% old vine Grenache and a small portion of Syrah that averages less than 5% of the blend. The terroir is mostly sandy soil in the Palestor lieu-dit.

The wine is aged in demi-muids for 13 months before bottling. The production is quite small with about 100 cases of wine being produced in each vintage.

In 2012 Domaine Moulin Tacussel produced a Vieilles Vignes bottling made from 100% old vine Grenache planted in the Charbonnieres lieu-dit. The wine was aged in foudres for 12 months before bottling.

Domaine Moulin Tacussel Chateauneuf du Pape Blanc is a blend of 30% Grenache Blanc, 30% Roussanne, 20% Clairette, 12% Bourboulenc and 8% Picpoul. The wine is aged in new and used, French oak barrels for 6 months prior to bottling.

Domaine Moulin Tacussel can be enjoyed on the young side with about 1 hour of decanting. This allows the wine to soften and open its perfume. Older vintages might need very little decanting, just enough to remove the sediment.

Domaine Moulin Tacussel is usually better with 2-4 years of bottle age. Of course that can vary slightly, depending on the vintage. In the best vintages the wine should be consumed within 3-12 years after the vintage.