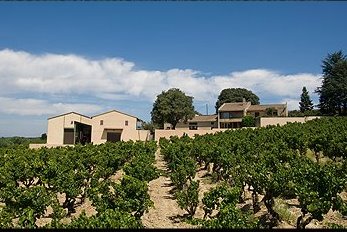 Learn everything about Domaine Roger Perrin Chateauneuf du Pape with wine tasting notes, wine and food pairing tips, best vintages, a history of the property and information on the vineyards and winemaking. If you want to read about other important wineries and wine makers from the Rhone valley: Links to all Rhone Valley Wine Producer Profiles

In an appellation where many growers have vines more than 100 years old, Domaine Roger Perrin is on the young side as it was formed in 1969 by Roger Perrin. However, the vineyards were in existence before that as they date back to about the start of the 20th century.

The vineyards are divided into 61 separate parcels that are dispersed in different lieux-dits in Chateauneuf du Pape. Most of their vines are planted in two different soil types, rocks and stones over clay and limestone and they have also sandy soils as well. The average of their vines is more than 60 years of age, with some vines being more than 100 years old.

Domaine Roger Perrin Chateauneuf du Pape is a blend that is usually close to 76% Grenache, 12% Syrah, 7% Mourvedre, 3% Cinsault, 2% Clairette, 2% Counoise, and 2% Vaccarese. However, depending on the vintage, that blend can vary to some degree. The terroir is rocks, stones, sand and limestone soils.

The vines are planted in the la Bertaude, Bois Lauzon, Cabrieres and Chapouin lieux-dits. Between 30% to 40% of the grapes are destemmed. Vinification takes place in traditional cement vats, foudres, used oak barrels and 15% new, French oak barrels for an average of 15 months before bottling. The production hovers at close to 4,200 cases per year.

Domaine Roger Perrin Reserve Vieilles Vignes – Made from a blend of 70% Grenache, 20% Syrah and 10% Mourvedre. Although Cinsault can also be used in the blend. The grapes used for the Vieiles Vignes are from a parcel selection of the estates oldest vines. The terroir is in sand and rock soils.

Much of the Grenache used in this cuvee are from vines over 100 years of age. The vines are planted in the la Berthaude, Cabrieres and Chapouin lieux-dits. The wine is aged in a combination of 30% new French oak barrels, and older oak casks for about 12 months. Only 650 cases are produced each vintage.

Domaine Roger Perrin Chateauneuf du Pape Blanc – From a blend of 50% Grenache Blanc, 25% Clairette, 20% Roussanne and 5% Bourboulenc, the fruit source for this wine comes from some of the oldest white wine vines in the appellation as they were planted all the way back in 1921!

The wine is aged in a combination of steel tank and new, French oak barrels for 6 to 7 months before bottling. The production is close to 650 cases per year.

Domaine Roger Perrin can be enjoyed on the young side with decanting of 1 hour or so. This allows the wine to soften and open its perfume. Older vintages might need very little decanting, just enough to remove the sediment.

Domaine Roger Perrin is usually better with 3-4 years of bottle age. Of course that can vary slightly, depending on the vintage. In the best vintages the wine should be consumed within 4-14 years after the vintage.

Domaine Roger Perrin also owns 25.6 hectares in the Cotes du Rhone appellation which are used to produce red, white and rose’ wine. They also own another 6.38 hectares of vines classified as Vin de Pays.