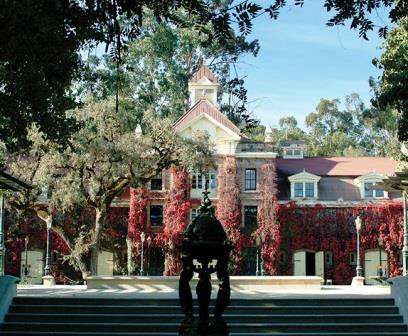 The Inglenook vineyards have one of the longest, and most interesting stories of any of the founding vineyards in the Napa Valley region. The original estate was created in 1873 by William C. Watson, Watson was an officer of the Bank of Napa. William C Watson was already interested in wine due to his being the son in law of George C Yount. Watson named the property Inglenook, which was an old Scottish term for a cozy corner. The original intention for William Watson was to create a resort with a small vineyard.

William C Watson did not keep the estate for long. After cultivating 40 acres with vines, he sold the property. In 1879, Captain Gustave Niebaum purchased the Inglenook Vineyard. At time of the sale to Gustave Neibaum, the estate had 70 acres planted with vines. At the same time, Gustave Niebaum also obtained the neighboring 440 acre property belonging to the Rohlwing family. In total, to create his dream estate, Gustave Niebaum spent close to $50,000, which is a massive sum of money in those days!

Gustave Niebaum graduated from Helsingfors Nautical Institute. He was Captain of his first ship by the time he was only 21 years old. It was during his travels to the San Francisco area that he became interested in the wine business. It took 4 years of work after buying the land, but by 1882, he began construction of the main house that is still in use today and Inglenook Vineyards. 1882 was a big year for Neibaum as he purchased 712 additional acres of vines, expanding the estate to more than 1,200 acres of land! The next major addition to the property was to dig and create a series of underground caves for the aging process, mimicking how the wines of Bordeaux were being aged.

Even though Gustave Niebaum did not have an official residence built yet, his first 4 years as the owner of Inglenook Vineyards were spent replanting the estate. He removed the remaining Mission grape varieties from the vineyards, replacing them with Burger, Gutdel, Riesling, Burger, Traminer and most importantly, Cabernet Sauvignon! Construction of the mansion was completed in 1887. 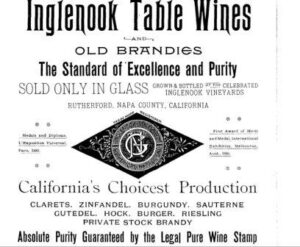 Inglenook Vineyards won a gold medal at the 1889 Paris Exposition for their wine. That notoriety made it possible to have their wines placed in all the First Class dining cars on the Canadian Pacific Railroad. The newfound wealth allowed Gustave Niebaum to continually increase the size of their vineyards so that by 1893, Inglenook had over 300 acres of vines. 50 acres of those vines were already planted to phylloxera resistant root stock. Inglenook by this time was producing a wide range of products including Zinfandel, Bordeaux blends, sweet, white wines, and other assorted varieties as well as Brandy. At its peak, at the turn of the century, Inglenook was producing close to 60,000 cases of wine each year!

Inglenook was one of the first, if not the first California winery to bottle and sell their own wine, advertising a guarantee of authenticity.

Gustave Niebaum died in 1908. For 3 years, Inglenook ceased production, going back into business in 1911. From that point forward, the estate was managed by his widow, Susan Niebaum until John Daniel came of age and took over the property.

During Prohibition, Inglenook survived by selling grapes and grape by products. Following the repeal of Prohibition, Inglenook became one of the first California wineries to begin producing and bottling wines made from Cabernet Sauvignon. They started this by 1934, as you can see from this rare menu, printed back in 1940. 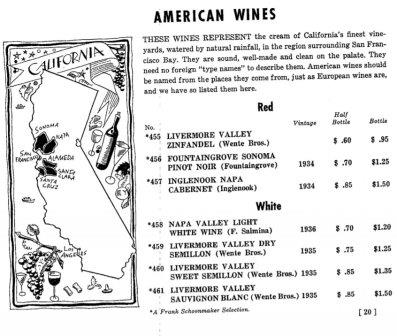 John Daniel Jr. began taking control of Inglenook in 1939. The next accomplishment by John Daniel was when he purchased the vineyard, long known as Napanook in 1946. Perhaps the most interesting creation of the John Daniel Jr. era was the decision to mark specific, high quality barrels, giving them a special number. That cask number was printed on the label for the wine. The best of those wines are now legendary among, old wine collectors. Some of those bottles sell for thousands of dollars today! If you have a bottle, and need a friend to help you taste it, I am there for you! The numbered program successfully ran from 1940 to 1964.

John Daniel Jr continued managing the vineyard until he sold the history property in 1964 to Allied Grape Growers. John Daniel Jr hung on to large parcels of land and the mansion. Heublein Incorporated purchased the majority of the stock of the Allied Grape Growers company in 1969, becoming the owner of Inglenook Vineyards. After John Daniel died in 1970, his widow sold most of their holdings. She retained the Napanook Vineyard, giving that to her daughters. They used that vineyard to form Dominus, with Christian Moueix.

The Inglenook vineyards changed hands in 1975 when it was purchased by Francis Ford Coppola. Coppola bought everything but the famous, Inglenook name. Francois Ford Coppola earned his fortune as a Hollywood director, who has just made “The Godfather. At the time of the purchase the estate included 1,560 acres of land and the original, Gustave Niebaum mansion. It was at this time that the property was renamed, Niebaum-Coppola Estate Winery.

Under its new owners, the Inglenook Niebaum-Coppola Estate Winery had their first official harvest with the 1978 vintage. In that year, they created their new, Proprietary Blend, Rubicon, which took the inspiration for its from the crossing of Julius Caesar over a river on one of his military campaigns, Even though Francois Ford Coppola loved Italian wines, Rubicon was made from a typical, Left Bank Bordeaux blend. Because Rubicon sees extended aging, the first vintage was released in 1985. 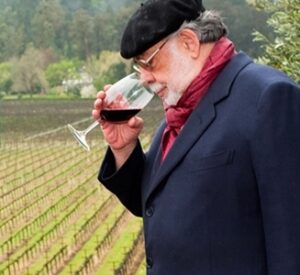 Inglenook produces a wide range of red and white wines from the Napa Valley and Rutherford. Inglenook owns are 1,500 cases of land, whcih includes 2005 acres of vines. The best terroir owned by Inglenook is Rutherford Bench. The terroir has slopes, gravel, loam and clay soils. Inglenook has been 100% organic since 1975, although they were not certified until 2002. The majority of their vineyards are dry farmed.

Inglenook Rubicon – Produced from 100% Cabernet Sauvignon from estate owned vines in the Rutherford appellation. The wine is aged for 18 months in 75% new, French oak barrels. The grapes are planted the Apple, Cohn, Cree, Garden Gio and Walnut vineyards.

Inglenook RC Reserve Syrah The wine is made using almost 100% Syrah with just a drop of 1% Petite Sirah and is aged in 50% new, French oak barrels.

Inglenook Blanceaux is a white, Northern Rhone styled wine produced from a blend of 56% Viognier, 22% Roussanne and 22% Marsanne.

The white wine of Inglenook is best served with all types of seafood and shellfish, sushi, sashimi, chicken, veal, pork and cheese.