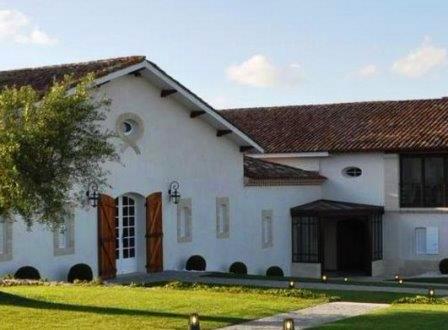 Learn everything about Chateau Sociando Mallet, Haut Medoc with wine tasting notes and wine with food pairing tips. Learn the best vintages, a history of the property, information on the vineyards and winemaking. If you want to read about other important, Bordeaux Chateaux: Links to all Bordeaux Wine Producer Profiles

Sociando Mallet takes its name from two previous owners. A nobleman from the Basque region, who was known as Sossiondo founded the estate in 1633.

In time, the name of the property was changed to match the phonetic sound to Sociando. The estate was confiscated and sold during the French Revolution. There was a time in the early 1800’s when the property was known as Sociando-Lamothe.

From there, the estate was owned by the Cabarrus family, who also owned Chateau Lagrange in St. Julien.

In about 1850, the land was sold to a captain in the navy who following the custom of the day, renamed the estate using his name of Mallet, and Chateau Sociando Mallet was born.

Jean Gautreau was born in 1927 in Lesparre, France. He did not come from a wine background. He discovered Bordeaux when he went to work as a Negociant in 1948. By 1957 he opened his own Negociant firm. Next, Jean Gautreau came up with the idea to provide mobile bottling trucks to chateau.

The modern age of Chateau Sociando Mallet began in 1969, when it was purchased by Jean Gautreau from the Tereygeol family for 250,000 French Francs, in part, on the advice Jean Michel Cazes of Chateau Lynch Bages in Pauillac.

When Jean Gautreau bought Sociando Mallet in 1969, the property had fallen into poor condition.

The cellars, winemaking facilities, vineyards and even the chateau, which was uninhabitable all needed work. As far as the vineyard, much of the land had gone fallow, as they had not been tended for years.

In fact, when Sociando Mallet was originally purchased by Jean Gautreau, less than 7 hectares were under vine. Today, the vineyard has almost 85 hectares, with much of that being cultivated with vines!

Jean Gautreau quickly began alternating the expanding of the vineyard with additional purchases and replanting selections of his newly purchased vines. He was also simultaneously remodeling and renovating the winemaking facilities.

At first, as he already owned his own negociant company, Jean Gautreau sold the entire production on his own. In time, this shifted, an the wines were eventually sold through to other negociants on the Place de Bordeaux.

Sadly, in November, 2019, after 50 years of managing Sociando Mallet, Jean Gautreau passed away. He was 92 years old. His daughter Sylvie Gautreau and grandson Arthur Gautreau are now in charge of managing the estate.

The large, 85 hectare Sociando Mallet vineyard is planted to 55% Merlot, 40% Cabernet Sauvignon and 5% Cabernet Franc. This represents a change in plantings.

Previously, the vineyard included a higher percentage of Cabernet Sauvignon and less Merlot, as well as a portion of Petit Verdot. As you can see, the Petit Verdot vines have been removed and more Merlot has been planted.

If the old adage is true, that all the best vineyards in Bordeaux have a prime view of the Gironde, Chateau Sociando Mallet, with its unobstructed view of the water from both directions has a privileged terroir. The vineyards are situated north of the Saint Estephe appellation and in many ways share the same terroir you find in Pauillac and in St. Estephe.

Being that far north in the Left Bank means they have a cooler climate than even their neighbors, just due south in St. Estephe, so they would naturally harvest later in most vintages and perform well in the hot dry years.

Although, cooler years would then, also make it difficult for the grapes to develop full ripeness.

Located in the far north of the Haut Medoc appellation in the village of Saint Seurin de Cadourne, the terroir is gravel, with a subsoil of clay, sand and limestone soils.

The vineyard of Sociando Mallet is planted to to a vine density of 8,333 vines per hectare. On average, the vines are close to 30 years of age. 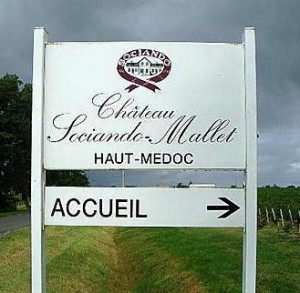 Today, the majority of Bordeaux wine producers believe in green harvesting to control yields and add concentration. But that is not the case with Sociando Mallet. They have some of the highest yields in the entire region at close to 80 hectoliters per hectare in some vintages.

Jean Gautreau prefers to allow nature to decide on the level of the yields at Sociando Mallet. At Sociando Mallet, while they do prune in the winter, they do not green harvest or de leaf in the summer, like most estates.

Those high yields at Sociando Mallet are part of what gives the wine its rustic and often green character, as well as its charm, according to the many fans of the estate.

The wine of Sociando Mallet is vinified in a series of temperature controlled, stainless steel vats and a small portion of traditional cement tanks. Malolactic fermentation takes place in vat.

in 1995, Sociando Mallet produced a special wine that was at the time, intended to only be produced in that one vintage, Sociando-Mallet Cuvee Jean Gautreau.

The wine was made from a barrel selection and was aged in 100% new, French oak barrels. To produce the wine, Jean Gautreau pulled the eighty best barrels from over 1,500 barrels.

Those barrels were aged separately. Then, out of those 80 barrels, Gautreau pulled what he considered the top 15 barrels. Those 300 cases were bottled for his own pleasure and were not originally intended for sale.

However, when he discovered he was running out of room, the wines were sold in the marketplace. Sociando-Mallet Cuvee Jean Gautreau is difficult to find.

But it might not sell for much a premium over the standard wine. Since that initial production, in 2013, Jean Gautreau decided to release several other vintages of the wine that covered the years 1996 to 2006.

Chateau Sociando Mallet needs time before it can be enjoyed. Young vintages can be decanted for an average of 2-3 hours. This helps the wine soften and open its perfume. Older vintages might need very little decanting, just enough to remove the sediment.

Chateau Sociando Mallet is usually better with at least 8-10 years or more of bottle age. Of course that can vary slightly, depending on the vintage character.

Chateau Sociando Mallet offers its best drinking and should reach peak maturity between 8-25 years of age after the vintage.

Chateau Sociando Mallet is a perfect match with Asian dishes, hearty fish courses like tuna, mushrooms and pasta as well as cheese.

Chateau Sociando Mallet is one of the most popular Cru Bourgeois Classified Bordeaux wines. Until recently, Sociando Mallet had a reputation for selling their wine at low prices.

Due to high demand, that is no longer the case. The wine of Sociando Mallet has a distinctive rustic, brawny, classic and sometimes herbaceous style that appeals to some tasters more than others.