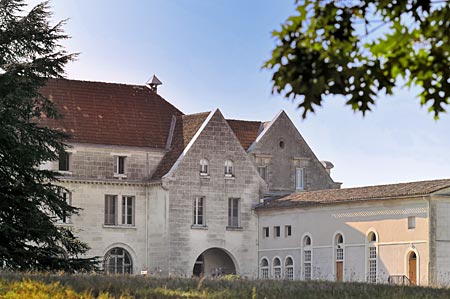 Learn everything about Domaine de la Solitude, Pessac Leognan with wine tasting notes, and wine with food pairing tips. Learn about the best vintages, wine ratings, a history of the property, information on vineyards, along with wine tasting reviews. If you want to read about other important, Bordeaux Chateaux: Links to all Bordeaux Wine Producer Profiles

Domaine de la Solitude dates back to the 1820s when the estate was known as The Hermitage, a monastic order. In fact, the estate now does double duty as both a monastic order and a vineyard. This really began to take place starting in 1993, when Olivier Bernard, of Domaine de Chevalier, agreed to manage the estate for a term of at least 40 years in a leasing agreement.

This was followed by another, updated, long-term leasing arrangement in 2009 when Olivier Bernard agreed to a similar arrangement with the owner of Lespault-Martillac which is also situated in the Pessac Leognan appellation.

The 32-hectare vineyard of Domaine de la Solitude has 25 hectares of vines reserved for red wine grapes which are planted to 60% Cabernet Sauvignon, 30% Merlot, 5% Cabernet Franc and 5% Petit Verdot.

7 hectares of vines are used for the production of white Bordeaux wine and those are planted to 60% Sauvignon Blanc and 40% Semillon.

To produce the white Bordeaux wine of Domaine de la Solitude, vinification takes place in French oak barrels. The wine is aged on its lees for 9 months with stirring.

There is no skin contact or malolactic fermentation. The white Bordeaux wine of Domaine de la Solitude is aged in an average of 15% new, French oak barrels for between 9 and 10 months, depending on the character of the vintage.

To produce the red wine of Domaine de la Solitude, the wines are vinified in traditional cement vats. Malolactic fermentation takes place in barrels. The wine is aged in an average of 25% new, French oak barrels for an average of 14 months before bottling.

The wines of Domaine de la Solitude are not sold as futures. They are only available after they are bottled. Most of the production is sold in France.

Domaine de la Solitude is usually better with 1-3 years of bottle age. Of course, that can vary slightly, depending on the vintage character. In the best years, the wine will be best between 10-15 years of age after the vintage. Young vintages can be decanted for an average of 1 hour or so.

This allows the wine to soften and open its perfume. Older vintages might need very little decanting, just enough to remove the sediment.

Domaine de la Solitude is best served at 15.5 degrees Celsius, 60 degrees Fahrenheit. This allows the wine to soften and open its perfume. The wine will also gently warm in the glass, releasing its aromatics. Older vintages might also need decanting, for both aerating and removing the sediment.

The white wine of Domaine de la Solitude is pairs well with wine to serve with shellfish, sashimi, sushi, all types of seafood, chicken, veal, pork, and cheese.

For the 2015 vintage, the owner, Olivier Bernard was chosen to make wine from what is probably the oldest grapevine in Bordeaux, La Vigne Bicentenaire. The vine used for the grapes is not planted in a vineyard. It’s actually placed in the city center of Bordeaux, in the Place de la Victoire.

The grape variety, Txakoli Noir, is an oddity in Bordeaux as it’s thought to have come from the Basque country. This special vine is more than 200 years old. Although it is quite rare, there are other pre-phylloxera vines in Bordeaux in both the Medoc and the Right Bank. Those pre-phylloxera vines are planted in vineyards and they are still producing grapes for wine in the Place de la Victoire.

Since the 1970s, 5 other old vine plants of the same age planted in the city have died. This is the only remaining 200-year-old vine remaining from those original plantings. To create, save and savor a bit of history, the vine was harvested by Olivier Bernard, who will also produce the wine which will be bottled as the aptly named La Vigne Bicentenaire.

The production is extremely small as less than 25 cases, or one full barrel of wine is produced per vintage.

If that was not enough to keep Olivier Bernard busy, his team is also responsible for tending the vineyards at Merignac, the Bordeaux airport to produce La Croix de Guyenne, which is the only known wine made from vines planted at an airport in the world!

La Croix de Guyenne is produced from a blend of 60% Merlot and 40% Cabernet Sauvignon. The unique airport terroir is mostly sand and clay soils. The vineyard is well taken care of during the year. The vine density is 10,000 vines per hectare. The production of La Croix de Guyenne is quite tiny as only 100 cases are produced in a good vintage.