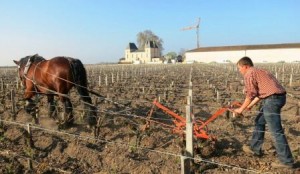 Biodynamic farming techniques for vineyards has become increasingly popular all over the world.  Numerous producers are experimenting with it in Bordeaux today. And why not?  The amazing success enjoyed by Alfred Tesseron at Chateau Pontet Canet in Pauillac has certainly gotten  other winemakers and growers attention.  Chateau Latour is experimenting with it and so Chateau Margaux.  In St. Emilion there are numerous estates using it as part of their viticulture practices, including Chateau Clos Fourtet.  Bordeaux is not the only famous wine region using Biodynamic farming techniques.  Burgundian’s are practicing it with great success and so are a myriad of producers in the Rhone Valley in both the Northern Rhone and Chateauneuf du Pape.  In California, Araujo is perhaps the best known proponent of Biodynamic farming.  It’s certainly catching on.

While some producers find it too much of a Religion and not enough of a science.  More producers in Bordeaux are practicing serious, sustainable farming techniques. One of the earlier champions of that outlook is Stephan von Neipperg, who with that move to sustainable farming was able to vastly improve the quality of his St. Emilion vineyards and wines.  von Neipperg is not alone in that approach to grape growing. Other chateaux are taking parts of the techniques pioneered by Rudolf Steiner and incorporating it into their vineyard management techniques.

The essence of biodynamic farming as described by Rudolf Steiner in 1924 and which is still in use today is that:

“You take cow horns and fill them in autumn with cow manure or with ground silica (quartz) in the springtime.  You bury them in the soil during winter, the other during summer and take them out again in the spring or autumn accordingly.  You take a little of the contents and sit it rhythmically in water for one hour and this highly diluted liquid is sprayed on the land.  It is quite an easy procedure.”

In the first instance it is necessary to bury cow horns in the ground with quartz crystals. Quartz crystals are made up of rock, rock that has been compressed and grown over a long period of time and therefore have certain properties in regard to magnetism that can be of benefit for certain uses.  We all take for granted the fact that a compass uses a piece of metal in order for it to direct us to the north or the south, this metal is made up from material found in rock, the same place that quartz crystals come from. So it is pretty logical that lots of rock have properties that react with gravitational waves and quartz is just one example.  To make you feel better, how many of you are wearing a quartz watch, we have all seen them advertised and we know that they exist, but how many of you actually believed that having a quartz crystal actually helped keep your watch from losing time, probably not many of you.  So quartz crystals have been known about for a long time and are in use in a number of different objects, including watches.  So the fact that they are used in biodynamic farming should also not be so alarming.  The purpose of the crystals is to act as a catalyst for the growth of bacteria in the soil

So when you read the following, about the first process in burying the cow horn which is found in most literature on the subject – just ignore it:

“We have taken the first step in making the preparations and observed their ingredients and found polarities between them.  When we grasp a polarity it can lead to a concentration of view towards intensification.  This happens when we fill these substances into horns.  We interfere in a natural process. Nature would never come to this idea to stuff the horns with these ingredients.  It is not to be found in her wisdom that these two poles could be united in such a way.  It is through spiritual insight that we intervene in predetermined processes of nature”

All that biodynamic farming for wine makers is doing is artificially attempting to restore the balance that was there before we started farming the soil and polluting the water.

With Biodynamic Farming for Wine Makers, at no time, as one other book on biodynamic suggests is the second part of the process, the stirring of the water anything other than giving energy back into the water. In this case I am not referring to spiritual energy, but the sort of energy you can measure in Hz.  Stirring water so that it generates a vortex is a very good method of giving water additional energy so that it reacts with the bacteria stimulating it to generate more bacteria. This stirring can be done by anyone including a machine, the only important factor is that the water must not be over stirred giving the water too much energy.

The purpose of stirring the water is not the following:

“By stirring, the earthly substance is transformed into a liquid state. It is especially during the stirring of the preparations that we can build up a personal relationship which leads us to a deeper understanding of what we are doing. From this point of view it is the most crucial stage of the whole preparation-making”

The preparation of the manure using cow horns, quartz crystals and water should not now offer up any contradictions, it is a very simple scientific process of generating bacteria.  Anyone can do it. In fact I am pretty sure you don’t need even these specific objects, other animal horns and minerals will probably do the same job, and you can probably shake the water instead of stirring it as long as it creates mini vortexes.

The idea that the moon plays a role in planting is also a tradition that stretches back to the ancient Egyptians and was used for over 3,000 years.  It is only because of the Victorians that we have dismissed this idea as being wrong.  May I suggest this year, you try a simple experiment at home using any seed that you want, even bring the children into it.  Plant the seeds over varying days before, during and after the full and new moon and then after one month, say to yourself that it is not true. You will be shocked at the difference in the growth of the seeds based upon the timing that you planted them.  If you need to look at large scale studies, search for Kolisko on the internet as she was a scientist that proved beyond doubt that the cycles of the moon were hugely significant. There is not enough space here to explain the science behind how the moon affects the growth patterns, but you will have to take my word for it that is it all to do with electromagnetic vibrations affecting the water content of the plants. The different cycles of the moon generate different vibrations and the plants react to each one of these differently, this is not pseudo-science, it is fact.

Sadly however, it is only the wine industry that seems to have seriously taken on board the advantages of utilizing biodynamic wines in their production methods, maybe it is because a bottle of wine can sit around for up to 50 years and during that time the bacteria within it lives and breathes, that you can understand why there is lots to consider, the wine grows and changes with the years.  A piece of fruit that is probably going to be sold in a supermarket, plucked early from its tree or dug up from the soil and eaten within a day or two is not something that is going to engender much discussion about the improved taste, particularly when the growth is artificially stimulated by the use of fertilizers.

One other point that gets discussed is the timing of drinking the wine and whether there are good and bad days. Let me give you the reason why this could be possible and I will let you make the decision.  Wine is full of bacteria, which is alive.  All living organisms are affected by electromagnetic vibrations, from the very, very small to the very large.  We live on a planet that emits these vibrations, and we receive large variations in vibrations from the cycle of the moon, the sun and the planets.  They are like giant magnets in the sky.  Our blood coagulates at different rates depending on the sun, our thyroid gland is in a cycle with that of the planet mercury, trees grow in two week cycles related to specific planets and our urinary retention is affected by the cycle of the moon.  These are just some proven effects that the planets have on our biological make-up. Is it therefore much of a surprise to know that bacteria change on an hourly basis in relation to the cycle of the moon? Oceans change, so why not bacteria?  If they do change then the wine will also change.

So the next time you hear someone mention biodynamic farming don’t think that it is anything other than common sense farming.  Oh and if you are a wine producer make sure that your tastings are done only on the good days of the month, it will cost nothing to put in place yet and make you a fortune in increased sales.  This does mean of course for the rest of us, there is no point drinking good red wine on the bad days of the month as you won’t get the best out of it.  Maybe now you wish you had never heard of biodynamic farming?