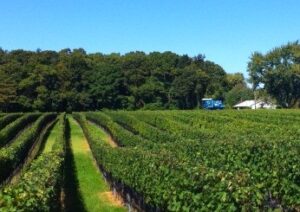 It is very common that people who have never witnessed a harvest will think more highly of a wine, if they were told it was hand harvested and the reverse if they were told the process was done by machine harvesting grapes.  It has become the common wisdom. And it is baseless.

Of course if a bin of machine harvested  grapes, from either a poorly tuned machine or due to an unskilled operator, shows up with lots of MOG (Material Other than Grapes, such as stems, leaves, even pieces of canes), it is tempting to condemn the machine. And many people do.

Around the year 2000 we traded an old Braud harvester for the new Saphyre series. At that same time a lot of noise was being made regarding how machine harvesting grapes negatively affects wine quality. Since we prided ourselves on the quality of our wines we decided that perhaps we should consider selling the brand new machine. Instead we decided to conduct a trial since little objective data was available to explain the impact of machine harvesting on wine quality.

We took a block of Cabernet Sauvignon and divided it in two equal sections. One was harvested by hand and the other was done with machine harvesting the grapes.  Other than that everything else was identical. The finished wines were transferred to new French oak barrels. The following April, by which time the wines were settled and stable, we decided to do a blind tasting to contrast the 2 methods. We wanted to see how important the difference was and whether there was any room for machine harvesting when quality is the top concern. We did expect that the hand harvested wine was going to be better, based on all the reporting. We just did not know how much better and whether that difference was so large that we should indeed sell the machine.

When we did the blind wine tasting, the first conclusion was that the two wines were in fact very close to one another. One was slightly more exuberant and more attractive and of course we figured it was the hand harvested lot. However when we unblinded them in a tasting, it was the other way around. So we concluded we must have made a mistake, since this flew against the common wisdom and did not make sense. So we tried again very carefully taking extra steps to insure that the samples indeed represented what the coded sheets said they would be. And sure enough the same result came about whereby there was a slight advantage to the wine produced with machine harvested grapes.

Startled by the result we had to make sense of it and explain it to ourselves as this was groundbreaking news for us. Going back over all the steps in both methods we came out with some good arguments that we think explain well the basis for the difference. Let us review them:

When we harvest by machine, we precede this with a negative harvest. This means that we send a crew to scout the fruit and cull any blemished fruit that we would not pick if it was by hand. This insures that whatever fruit is left is of a high quality.

The modern machines are infinitely programmable and a competent operator can adjust the shaking to what is necessary making it very gentle. It is not unusual that when the bins are brought back they are mostly full of whole berries and an occasional full cluster. Our youngest son is very skilled at tuning the machine to the state of the canopy and the fruit so that the correct amount of shaking is applied. There are no canes or leaves to be seen in the bins.
The machine can clean pick an acre in about 40 minutes. At 3 tons to the acre a batch of grape can be on the crush pad in about 1 hour and 10 minutes. The fruit is unloaded into a destemmer and from there it goes onto a sorting table to select out any MOG. Out of five tons it is rare to get more than a couple of inches at the bottom of a bucket filled with MOG. Mostly pieces of stems that the destemmer did not select out. If machine harvesting grapes is done right you, get whole berries and a few whole clusters, nothing else. When compared to hand harvesting ,the only way to get whole berries is to destem by hand. Destemmers invariably bruise the fruit. So if fruit integrity matters in the making of great wines, it seems to me the advantage goes to machines

Hand harvesting is done typically by about 10 individuals walking up the rows and loading harvested clusters into plastic boxes. When filled the boxes are deposited on the floor and every once in a while these are collected and stacked on a truck. It takes several hours to harvest the same tonnage. During that time the harvested fruit has been sitting around. Invariably some berries get injured and if it is warm spontaneous fermentation can begin.

By the time the fruit reaches the crush pad it is somewhere between three and five hours.  Having a crew of 10 or more usually means that some are new recruits and they are not necessarily doing optimal work. Leaving boxes on the ground occasionally causes dirt to adhere to the boxes and when they are stacked some dirt may mix in with the fruit.

So to summarize, machine harvesting grapes, IF DONE CORRECTLY can in fact produce superior results as explained above, because there is no contact of the fruit with anything but the plastic tubs and stainless steel bins. It gets to the crush pad in record time, preserving the most freshness in the fruit. And since SO2 is added in the bins we gain control of the process far earlier than with the hand method.

There seems to be a freshness advantage to the machine if a batch can be processed already in 1 hour and 10 minutes whereas it takes several times that for the hand-picked fruit to begin its processing.

We feel that negative picking is a requirement and it goes without saying that the machine must be in its best tuned condition and the operator must have a high level of competence. Reverse all this and it is easy to see a picture of broken branches and leaves and macerated fruit that give a bad name to machine picking.

It is possible to achieve better results with hand picking if a large, highly trained crew can pick as fast as the machine and can preserve the fruit in as clean a condition as possible. The reality is that such crews simply do not exist.

In our case we have become indifferent between machine harvesting grapes or hand picking. We pick by hand where we must be selective, such as in the case of noble rot affected fruit or if the crop is not homogeneous. Where the crop is clean and homogeneous, machine harvesting tends to be our preferred method. We now know than the same high level of quality is achievable regardless of the method of harvesting.

Charles Massoud of Paumanok Vineyards in New York is not the only grower to use machine harvesting for grapes. Nor is New York the sole region to practice this.  While uncommon in Bordeaux, many of the best producers of Muscadets machine harvest.  It’s a popular technique in Chablis with Chardonnay. But not with Grand Crus. In some  select appellations, there are producers in Burgundy and in Germany who machine harvest grapes. However, in Burgundy, starting with the 2011 vintage,  machine harvesting grapes was officially banned in Burgundy’s five grands crus monopoles. It is expected that starting with the 2014 Burgundy vintage, there will be a complete ban for all the grand cru classified vineyards.

Technology does help growers.  10 years ago, no grower would have considered machines to help with the arduous task of sorting. Yet, optical sorting technology has become a popular and successful technique. Who knows what the future holds.