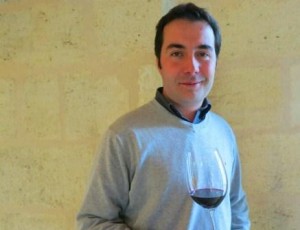 2011 Fonplegade From 95% Merlot and 5% Cabernet Franc, the 2011 Fonplegade reached 13% alcohol and represents 65% of the production.  This deeply colored wine begins with fennel, stone, coffee and black cherry aromas  and opens to a wine filled with sweet, round and fresh blackberries. 91-93 Pts

Jeff Leve  – Now that you have been at Fonplegade in St. Emilion for at least a little while, what changes have you been making that wil effect your 2011 Fonplegade?

Jean-Christophe Meyrou “First, we reduced the amount of new oak being used. The bigger change might be that as of the 2011 Bordeaux vintage, 8% of the best blended parcels will be aged in Nomblot, egg-shaped, cement vats.”

Jeff Leve  – What will aging in the Nomblot, egg-shaped, cement vats do for your 2011 Fonplegade wine?

Jeff Leve – What caused you the most trouble during the 2011 Fonplegade St. Emilion growing season?

Jean-Christophe Meyrou “The biggest problem we encountered at Fonplegade with the 2011 Bordeaux vintage was the heat wave at the end of June. I think it caused a lot of problems for other St. Emilion chateaux as well.”

Jeff Leve – With the sunburn caused by the heat wave you just mentioned, along with the reverse growing season, how much time did you need to spend sorting the 2011 Fonplegade?

Jean-Christophe Meyrou “At Fonplegade, not counting the work we performed in the vineyards, we sorted three times.  We sorted by hand before the grapes were received at the reception area, which was then followed by optical sorting and one more hand sorting before being moved by gravity on the way to fermentation”.