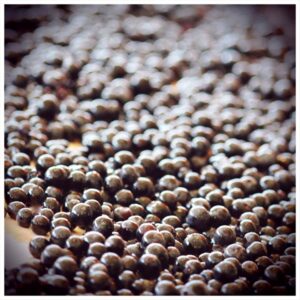 Jeff Leve: What effect does an early harvest have on the style of your wines and the level of phenolic ripeness in the grapes found in the 2011 Chateau Palmer Bordeaux vintage?

Duroux: “The first part of the growing season, from bud burst to flowering was very early in the 2011 Chateau Palmer. What made a big difference is the speed of the growth and ripening process between the flowering season and the picking. In 2003 for example, the time for this was shorter than normal. The result in certain circumstances cooked the wine’s aromas and produced dry tannins”.

Jeff Leve: What are the tannins like in the 2011 Chateau Palmer?

Duroux: “We know that there is a high tannin potential in the skins. At this stage, it is still too early to understand the quality of those tannins for 2011 Chateau Palmer”.

Jeff Leve: When did you start harvesting 2011 Chateau Palmer?

Duroux: “We started harvesting 2011 Chateau Palmer the 7th of September, We finished the Merlot on the same day we bgan picking Cabernet Sauvignon, the 21st of September.  We completed the 2011 Bordeaux harvest the 29th of September under perfect, warm, sunny conditions”.

Jeff Leve: What role will Petit Verdot play in the 2011 Chateau Palmer?

Duroux: It is too early to know yet.  We will have a first idea in December when we will start our blending sessions”.

Jeff Leve: With your early vats, what is your technical analysis showing?

Duroux: “At this stage we have “normal” alcohol levels: 13 to 13.5 for the merlot and we expect 12.5 for the cabernets. pH are a little lower than last year and the malic acid are low. That means that the final acidity will not be much lower after malo lactic fermentation. The 2011 will certainly be more nervous than the 2009 or the 2010 Bordeaux vintages”. 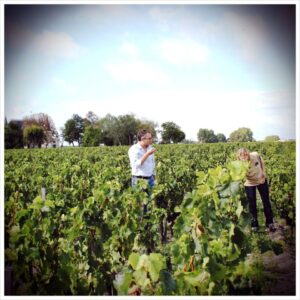 Jeff Leve:  Did the July and August rains come at a time that helped your vines?

Duroux: “Definitely !!! Without it, most of the ripening process would have been blocked. In early August, we  received 22 mm of rain. That was almost as much as the entire month of July that brought 24.5 mm.”

Jeff Leve: “With the recent early September storms, did the harvest dates change for you at Chateau Palmer?

Duroux: “It didn’t change anything for us. Generally speaking, 2011 is a very early vintage. Although, it was not as early as we thought at the flowering, because of the mild summer”.

Jeff Leve: What about the hail that you experienced during the summer? Did that have an effect the vintage?

Duroux: “Due to a hail storm at the beginning of June and a heat wave that took place at the end of June, our crop is very low”.

Jeff Leve: When you say a small crop, what sort of yields do you think you might end up with?

Duroux: “Less than 20 hectoliters per hectare. This is the lowest yields we’ve had at Chateau Palmer since the 1961 Bordeaux vintage!”

Jeff Leve: Do you have fears of rot?

Duroux: “With such a low crop, there is almost no rot pressure on our vineyard”.

Jeff Leve: Do you use satellite imagery?  If so, what part did it play in the 2011 harvest?

Duroux: “Satellite imagery helps us to know our vineyard much better and drives us to harvest”.

Jeff Leve: What about optical sorting?

Duroux: “Optical sorting had no interest in 2009 or 2010 because of the high quality of the fruit that we brought in. In 2011, it is definitely useful. We often see green berries and dried berries because of the heat wave we experienced at the end of June. Optical sorting is a very efficient method to keep only the best fruits possible”.

Jeff Leve: What specific choices will you need to make during the vinification  for 2011?

Duroux: “The big challenge is to understand the best way to extract tannins from the skins. Our goal is always to produce a delicate and refined wine at Chateau Palmer, instead of a big monster Bordeaux wine”.