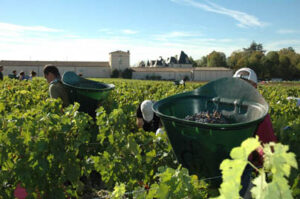 The 2010 Bordeaux harvest for the red wines at Chateau Haut Brion began September 8. On that date, they started picking the fruit from the youngest Merlot vines. This always takes place before they start working with Cabernet Sauvignon and Cabernet Franc as Merlot develops first. The Merlot crop took less than a week to harvest. They accomplished this starting September 13. Much of the fruit was harvested by September 17. The final Merlot grapes were brought in September 22. The last few days of the Merlot harvest took place under slightly rainy conditions. This was perfect as the soils were still dry from the draught conditions of the summer for this Bordeaux wine property. 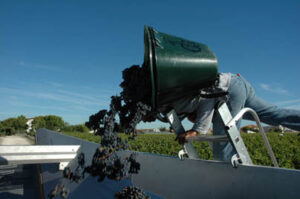 According to Jean-Philippe Delmas, “The grape juice is “sticky.” This is a direct reflection of how ripe and sweet the fruit is. “While not worried about the quality of these grapes, due to the lack of rain during the summer,we were anxious about their ability to produce juice.”

Less than a week later, on September 27, Chateau Haut Brion started picking Cabernet Franc. According to Delmas, “For the first time in the history of the chateau, the sugar levels of the Cabernet France were at the same level as the Merlot! Both varietals surpassed 14% potential alcohol.” As the harvesting had already commenced for two of the three varietals, only one Bordeaux wine harvest decision remained. When should they start the Cabernet Sauvignon harvest? 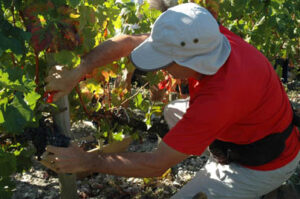 September 30, was the first day they went into the vineyards to work with the Cabernet Sauvignon. More needed rain fell at that point, forcing the pickers to wait a few days before resuming their efforts. October 5 was the date Delmas determined the pickers should return to work.

The last grapes from the 2010 harvest were brought in October 9. Was Delmas happy with the vintage? “We are bowled over by the quality of what is coming into the cellar. Laboratory analyses show that sugar levels in Cabernet Sauvignon are as high, if not higher, than Merlot!” Was this homogenous? “All the vats of wine, from every plot and every grape variety, are above 14° alcohol. This has never happened before.” 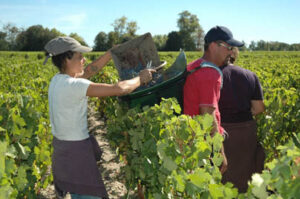 All wine tasting is a matter of opinion. Yet it’s important to note,  2009 Haut Brion is high in alcohol. But alcohol levels alone do not paint a complete picture of any Bordeaux wine.  2009, Haut Brion offers ample acitidy giving the wine lift and freshness.  2009 Haut Brion is one of the few wines from the vintage I tasted that could possibly hit 100 Pts! It is a stunning wine. 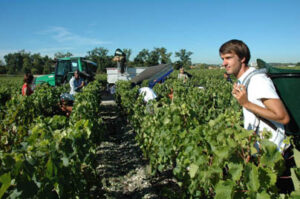 According to Jean-Philippe Delmas, there are a number of things making the 2010 Bordeaux wine harvest unique. “The dry weather increased the differences in the parcels and varietals. Merlot was picked early. Cabernet Franc and Cabernet Sauvignon were both picked late. We started harvesting Merlot one day earlier than we did in 2009. Keep in mind, 2009 matured early. We finished picking both Cabernets one day later than we did in 2002. In 02, the fruit took a long time to develop. It was considered a late vintage”

With all that to consider, will 2010 be remembered as a vintage that was harvested early? Or will 2010 be viewed as a year that developed late?