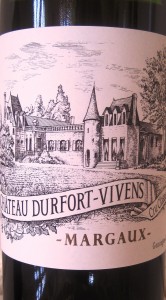 Gonzague Lurton of Chateau Durfort Vivens is trying to get things moving in the right direction at with the 2010 Durfort Vivens.   From a technical point of view, things are looking good for this property. In a discussion with Gonzague in June about their future wine making goals, Lurton stressed adding more concentration to the wine.  The raw materials seem to allow them to do just that.  Their cabernet sauvignon in 2010 at 12.97% is slightly riper and more potentially more alcoholic than in 2009 at 12.95% or 2005 12.86. All those years show marked improvement over their 2000, which was harvested at 11.55. Total acidites are at the lowest levels the property has previously recorded at 3.70.  The merlot is potentially 14.11% potential ABV which is slightly less than in 2009, but not much different. Both those vintages were much higher than they recorded in previous years, so they are on the right track with their 2010 Durfort Vivens.