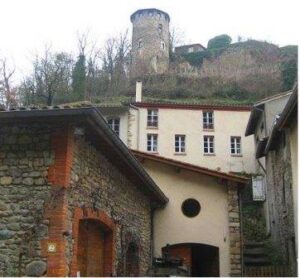 Everything about Domaine Yves Gangloff Cote Rotie with wine tasting notes, wine and food pairing tips, best vintages, a history of the property and information on the vineyards and winemaking. If you want to read about other important wineries and wine makers from the Rhone valley: Links to all Rhone Valley Wine Producer Profiles

Domaine Yves Gangloff is based in the Condrieu appellation. Yves Gangloff, who comes from the Alsace region founded the Northern Rhone Valley domaine in 1982 after learning the wine trade during the time he apprenticed with Delas Freres.

With only one hectare of vines to start with, at first, they were selling their harvest to negociants.

That changed in 1987, when the negociant could not buy their grapes. This left them with either no choice, or a golden opportunity for the young Yves Gangloff. He saw this as an obvious chance to go out on his own and he quickly began producing and selling his own wine.

Domaine Yves Gangloff La Barbarine was first produced in 1997 vintage. The wine is made from an average blend of 92% Syrah and 8% Viognier. The grapes used for this wine are from his younger vines blended with older vines from Combard Mollard and Cote Rozier that are at least 50 years of age.

Domaine Yves Gangloff La Sereine Noire is made from 100% old vine Syrah that is at least 50 years of age. The grapes vines are planted in the Mollard and Cote Rozier lieux-dits, making this a blend of grapes from both the Cote Blonde and Cote Brune.

The stems are removed from 50% to 60% of the grapes. The wine is vinified in stainless steel vats. The wine is then aged in between 30% to 50% new, French oak barrels for up to 24 months prior to bottling. The production is on average close to 650 cases of wine each year.

Domaine Yves Gangloff, when young, should be decanted at least 1-3 hours, give or take, allowing the wines to soften and open their perfume. Older vintages might need very little decanting, just enough to remove the sediment.

Domaine Yves Gangloff is usually better with 5-10 years of cellaring and should be at its best between 9-20 years of age.