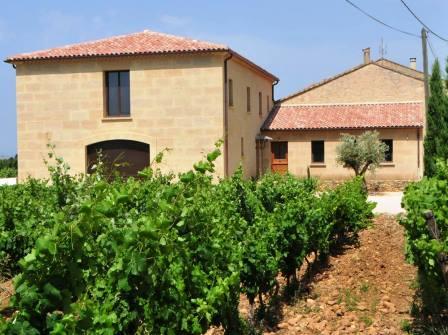 Learn everything about Mas de Boislauzon Chateauneuf du Pape with wine tasting notes, wine, and food pairing tips, best vintages, a history of the property, and information on the vineyards and winemaking. If you want to read about other important wineries and winemakers from the Rhone valley: Links to all Rhone Valley Wine Producer Profiles

Mas de Boislauzon owns 9 hectares of vines in Chateauneuf du Pape. 8 hectares are used for the production of red wine grapes. 1 hectare is reserved for the white wine.

The vineyards are in 15 parcels located in various terroirs and sectors including of course the Boislauzon, Cabrieres, La Gardiole, Palestor, and Pignan lieux-dits. Depending on the vineyard, they have a terroir of sand, rocks, and clay soils.

The estate practices biodynamic farming techniques. In 2012, Mas de Boislauzon were certified agriculture biologique. With 6 generations of winemaking in the family, the wines produced today at Mas de Boislauzon today are stunning examples of what Chateauneuf du Pape does best.

Like many Chateauneuf du Pape growers, the vines of Mas de Boislauzon are located in different sectors spread across the appellation. Most of their terroirs are sand, loam and limestone, rocks, and clay soils.

Their oldest, most prized vines are their Mourvedre, which on average are a respectable 70 years of age.

Sorting takes place in the vineyard and again at the cellars of Mas de Boislauzon. They do not destem the grapes. Alcoholic fermentation takes place in traditional cement vats.

Generally speaking, the grape varieties are fermented separately, although some of their Grenache and Mourvedre are co-fermented in the same vat. Wines are aged in tanks and small oak barrels, depending on the wine and the variety.

Mas de Boislauzon Chateauneuf du Pape Tradition is usually a blend of 70% Grenache and 30% Mourvedre, although there are vintages when Syrah is also included as well.

The terroir is a mix of rocks, stones, sand, and limestone soils. The vines are planted in the Bois Lauzon, les Brusquieres, les Cabrieres, Palestor and Pignan lieux-dits. The wine is aged in concrete vats for about 12 months. The production is close to 2,500 cases per vintage.

Mas de Boislauzon Le Quet, which made its debut in 1996, is a blend of 80% old vine Grenache and 20% Mourvedre. The Grenache comes from old vines that average about 80 years of age. The wine is aged in 50% neutral oak and 50% concrete vats for about 12 months. The production is 425 cases per year.

Mas de Boislauzon Tintot is one of the few extremely limited amounts of wineries in Chateauneuf du Pape that produce wine from close to 100% old vine Mourvedre. In fact, the name Tintot is an old term for Mourvedre. Although some vintages can also include small amounts of Grenache in the blend as the vineyard is planted to 85% Mourvedre and 15% Grenache.

The vines are old, many are more than 80 years old! The vines are planted in a single parcel. Tintot made its debut only a few years ago, back in 2006. The wine is aged in a combination of barrels that range from 1 to 3 years of age for 12 months before being moved to concrete vats where it rests for an additional year before bottling.

The production is small. On average slightly more than 1,500 bottles are made in a good vintage! It’s hard to find, but worth the effort. However, the wine is not made every year, it is only produced in the best vintages.

Mas de Boislauzon Famille Chaussy Selection is the most recent addition to their portfolio. The vines are planted in the Palestor and Clos Saint-Pierre lieux-dits, giving you clay and limestone soils. The vineyards are located in the north of the appellation. The wine blends 50% Grenache, 30% Mourvedre, and 20% Syrah and is aged in a combination of barrels and tanks.

Mas de Boislauzon Chateauneuf du Pape Blanc is produced from a blend of 25% Grenache Blanc, 25% Clairette, 25% Roussanne and 25% Bourboulenc. Aged in barrel, the production is 250 cases each vintage.

Aside from producing stunning Chateauneuf du Pape wines, Mas de Boislauzon makes a strong Cote du Rhone village wine from 15 hectares of vines. The wine is a blend that is usually close to 70% Grenache, 20% Syrah, and 10% Mourvedre.

In 2012, Mas de Boislauzon added a Vin de France to their growing portfolio. La Chaussynette, a blend of 70% Grenache and 30% Syrah sells for a song for a wine of that level of quality.

Mas de Boislauzon can be enjoyed on the young side with 1-2 hours of decanting. This allows the wine to soften and open its perfume. Older vintages might need very little decanting, just enough to remove the sediment.

Mas de Boislauzon is usually better with at least 5-7 years of bottle age. Of course, that can vary slightly, depending on the vintage. In the best vintages, the wine should be consumed within 5-25 years after the vintage.