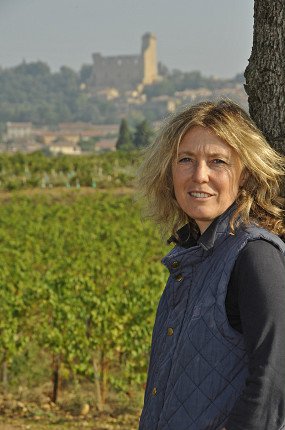 Learn everything about Domaine Isabel Ferrando Chateauneuf du Pape with wine tasting notes, wine and food pairing tips, best vintages, a history of the property and information on the vineyards and winemaking. If you want to read about other important wineries and wine makers from the Rhone valley: Links to all Rhone Valley Wine Producer Profiles

Isabel Ferrando did not intend to have a career as a winemaker. In fact, her first career was in the banking industry. Isabel Ferrando changed her life, moving from the financial world to a life in wine. Isabel Ferrando learned about winemaking in the Gigondas appellation, while working for Raspail Ay.

Isabel Ferrando founded the estate in 2004 when she purchased 3.9 hectares of vines in the southern part of the appellation. The goal, according to Isabel Ferrando was to create a wine that was distinct from Domaine Saint Prefert, her other Southern Rhone property.

The difference for her was about the uniqueness of terroir in each location. To help her realize her ambitions, she brought in Philippe Cambie as the consultant.

Domaine Isabel Ferrando Colombis is made from 100% old vine Grenache that ranges in age from 65 years to more than 100 years of age. The terroir is mostly sandy soils, as well as clay soil. The vines are in 3 lieu-dits, Cristia, Les Roues and Colombis, which is where the wine takes its name from. Domaine Ferrando Colombis made its official debut with the 2004 vintage.

The percentage of stems included varies, from vintage to vintage. For example, in 2009 and in 2010, two very ripe vintages, Colombis was vinified using only whole cluster fruit, meaning that 100% of the grape stems were included during the fermentation. That has not always the case here. But starting with the 2009 vintages, the berries have not been destemmed.

Domaine Isabel Ferrando Colombis is made from 100% old vine Grenache. The wine is aged in a combination of short, conical shaped oak vats and used French oak barrels.

Not much of this wine is made. Production of Ferrando Colombis is on average, about 550 cases per vintage. This is a great expression of Chateauneuf du Pape and while it can be difficult to find, especially after the wine has been in the marketplace for a few years, it is worth the effort to find a few bottles.

Domaine Saint Prefert Isabel Ferrando F601 is the newest entry in the strong stable of wines from Isabel Ferrando. 2018 is the initial release. Produced from 100% old vine Cinsault planted in 1928.The wine takes its name from the parcel where the vines are planted, which is located on the far south of the estate. The terroir is vert fine sand with quartz and a subsoil of blue clay. The wine is aged completely in demi-muids. F601 is close to impossible to find as only 800 bottles are produced.

Isabel Ferrando also produces not only Saint Prefert, but in addition she produces red and white wine in the Cotes du Rhone appellation.

Domaine Isabel Ferrando can be enjoyed young, with about 1-2 hours of decanting. This allows the wine to soften and open its perfume. Older vintages might need very little decanting, just enough to remove the sediment.

Domaine Isabel Ferrando is usually better with 3-4 years of bottle age. Of course that can vary slightly, depending on the vintage. In the best vintages the wine should be consumed within 4-18 years after the vintage.

The white wine of Domaine Ferrando is best served with a myriad of different seafood dishes, shellfish, crab, lobster, sushi, sashimi, chicken, pork and veal, as well as Asian cuisine.