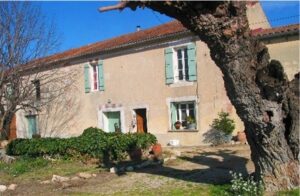 Learn everything about Domaine Charvin, Chateauneuf du Pape with wine tasting notes, wine, and food pairing tips, best vintages, a history of the property, and information on the vineyards and winemaking. If you want to read about other important wineries and winemakers from the Rhone valley: Links to all Rhone Valley Wine Producer Profiles

Domaine Charvin was created in 1851 by Guillaume Charvin. For one hundred years, the harvest of Domaine Charvin was sold in bulk to negociants in the Southern Rhone Valley. To commemorate owning the vineyards for a full century, for the first time, the Charvin family bottled their wine in 1951. The practice of selling their wine to negociants continued for some time after that.

When Laurent Charvin took over managing the Domaine, they had about 4 hectares of vines. Today, they have twice that amount of vineyard land cultivated with vines.

The Chateauneuf du Pape vineyards of Domaine Charvin include 8.2 hectares of vines in Chateauneuf du Pape, in the lieux-dits of Cabrieres and Maucoil and lArnesque, in the northwest part of the appellation. Today, the estate is managed by Isabelle Charvin and Laurent Charvin.

They also own 12 hectares of vines in the Cotes du Rhone appellation. Their vineyards have a terroir of rocks and stones over limestone and clay soils. On average, their vines are close to 50 years of age.

While many producers make special, high-end cuvee’s, that does not work for Charvin. At Charvin they believe that would take away from their main wine. Not only are the views traditional at Charvin, so is the winemaking at Domaine Charvin.

The fruit used to produce Domaine Charvin rouge ranges from 80-90% old vine Grenache with Syrah, some Mourvedre, and a bit of Vaccarese. The Vaccarese are old vines that were planted in the 1960s. The terroir is mostly rocks and sand. The vines are on average close to 50 years of age. The majority of their vines are planted in 2 lieux-dits, Cabrieres, and Maucoil. A small portion is planted in lArnesque.

The grapes are not destemmed. The fruit is whole-bunch fermented. Vinification takes place in traditional cement vats. There are daily pump-overs during the maceration and fermentation period which could last about three weeks on average, give or take.

The wine is aged in traditional red, cement tanks for an average of 21 months before bottling. The production of Domaine Charvin is close to 2,500 cases per vintage.

Since 2015 Domaine Charvin has been making a Chateauneuf du Pape Blanc from about 90% Clairette Rose and 10% Bourboulenc. The Clairette Rose is interesting because the vines are old, having been planted in 1968. Not much is made as the production is on average about 75 cases of wine per vintage.

Domaine Charvin can be enjoyed on the young side. Young vintages can be decanted for 1-2 hours. This allows the wine to soften and open its perfume. Older vintages might need very little decanting, just enough to remove the sediment.

Domaine Charvin is usually better with 4-7 years of bottle age. Of course, that can vary slightly, depending on the vintage. In the best vintages, the wine should be consumed within 6-20 years after the vintage.

Domaine Charvin is a beautiful expression of Chateauneuf du Pape with a focus on purity, ripe red fruits, and freshness, with elegant, silky textures. The wines of Charvin age and evolve quite nicely.

While many producers have steadily increased the price of their wines, Charvin has been slower than some of his peers to raise prices which has kept a lot of long-time customers, including me very happy.