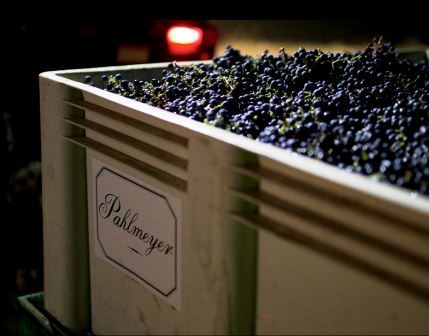 Everything about Pahlmeyer Napa Valley California Cabernet Sauvignon wine producer profile, wine tasting notes, wine and food pairing tips, best vintages, history of the property, information on their wine making techniques, terroir and soil. You can also read about the Grapes used for California wine and learn about the extensive History of Napa Valley, California Wines

The estate was founded by Jason Pahlmeyer in the early 1980’s. Owning a winery was not the original goal for Jason Pahlmeyer. His intentions was more on the real estate development side. But as you know, things change and Jason Pahlmeyer entered into a partnership with John Caldwell and 55 acres of land in the Coombsville appellation and Pahlmeyer was born. The vineyard was planted in 1981.

The initial vintages were sold as simply Pahlmeyer Estate bottled, listing the grapes, which were a typical blend found in the Left Bank of Bordeaux. In 1989, they added their first Chardonnay to their growing lineup of wines. they brought in Bob Levy to make their white wine. Bob Levy went on to eventually become the wine maker for Harlan Estate! Clearly, Jason could spot talent. In 1998, Pahlmeyer purchased vineyard land in the Atlas Peak appellation.

The next winemaker for the team was Helene Turley who began to work with the winery starting with the 1993 vintage. From that point, Pahlmeyer began planting new vineyards that were cultivated by David Abreu in the Sonoma Coast in 2000. I told you he knew good talent. Helene Turley was replaced by Erin Green. They soon brought in Michel Rolland as their consultant.

Things continued changing and improving from the 1994 vintage. The production for Pahlmeyer Red increased because they added new grape sources. Instead of only using grapes from the Caldwell Vineyard, they also began integrating fruit from their vines in the Atlas Peak appellation. After running the winery for over 30 years, Cleo Pahlmeyer, the daughter of Jayson began to take more control of managing the estate.

In November, 2019, the vineyard was sold to Gallo. The price was not disclosed. But rumors place the deal at a very high price, especially when you consider that the deal did not include vineyard land or the Wayfarer brand. Gallo entered into a long term vineyard lease to continue producing Pahlmeyer.

Today, the wines of Pahlmeyer are made from a variety of grape sources that include estate vines and purchased grapes. Their flagship wine is the Pahlmeyer Proprietary Red, which is a blend that can vary but on average, it’s close to 81% Cabernet Sauvignon, 7% Merlot, 6% Malbec, 3% Cabernet Franc and 3% Petit Verdot.

The fruit comes from Pahlmeyer Waters Ranch, Rancho Chimiles and the Stagecoach vineyards. The grapes are often harvested at night, so they remain cool, and retain their freshness. The wine is vinified in stainless steel vats. The wines is then aged in 85% new, French oak barrels for about 18 months before bottling. On average, the production is close to 4,000 cases per year.

Pahlmeyer recently created Piece de Resistance, which is a selection of their best best barrels. The production is minuscule, as only 100 cases are made each year. The wine is only available to mailing list customers.

Pahlmeyer wines are best served at 15.5 degrees Celsius, 60 degrees Fahrenheit. The cool, almost cellar temperature gives the wine more freshness and lift. Young vintages of their red wine can be decanted for 1-3 hours, depending on the character of the vintage. This allows the wine to soften and open its perfume. Older vintages might need very little decanting, just enough to remove the sediment.

The white wine of Pahlmeyer is best served with all types of seafood and shellfish, sushi, sashimi, chicken, veal, pork and cheese.