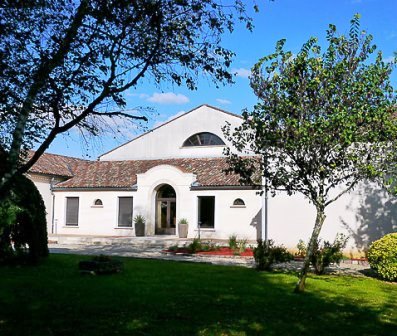 Learn everything about Chateau Romer du Hayot Sauternes with wine tasting notes, wine, and food pairing tips, best vintages, a history of the property, and information on the vineyards and winemaking. If you want to read about other important, Bordeaux Chateaux: Links to all Bordeaux Wine Producer Profiles

Chateau Romer du Hayot was originally part of the Chateau Romer vineyard. The chateau was founded in the 18th century by the Montalier family. Like many Bordeaux chateaux, its beginnings came through marriage and a dowry.

Eventually, the vast Romer estate was divided up into smaller parts. This took place in 1937, which gave birth to the Chateau Romer du Hayot vineyard. The name change came from one of the new owners, Madame du Hayot. From 1976 to 2002, the owners leased the vines of their previous sister vineyard, Chateau Romer.

During the 1970s, when new roads were being built in the Sauternes appellation, the wine-making facilities of Chateau Romer du Hayot were torn down. They were never rebuilt.

Today, the wines are vinified at two different estates owned by the same family; Chateau Andoyse du Hayot or Chateau Guiteronde du Hayot. The wine label was resigned after 2001 when Anne Farges began managing the estate. In 2008, Alain Raynaud was named as the consultant.

Before that, there was up to 5% Muscadelle in the vineyards! Over time, you can expect to see more Sauvignon Gris, which is slowly, but surely being added to the vineyard, as other, older vines die off.

Located in the commune of Fargues, the terroir is clay, limestone, and gravel soils. The closest neighboring vineyard belongs to Chateau de Malle.

Chateau Romer du Hayot can be enjoyed on the young side with no decanting. In fact, it is delicious and quite a treat young, even on release! However, Chateau Romer du Hayot is better with age and does not reach full maturity until it’s between 9-20 years of age, or in some years, perhaps even longer in the best vintages!

With Chateau Romer du Hayot, and frankly, all Sauternes, the temperature is more important than decanting.

Chateau Romer du Hayot is best served at 14 degrees Celsius, 57 degrees Fahrenheit. The cool, almost cellar temperature gives the wine more freshness and lift. The wine will naturally warm in the glass, while it develops more aromatic complexities and fleshes out. Chateau Romer du Hayot can be served with seafood dishes, especially shellfish, lobster, crab, and oysters on the half shell.

Foie gras is a perfect pairing with its natural sweet, salty and savory characteristics. Chateau Romer du Hayot can also be paired with roasted chicken, veal, and pork dishes that are either spicy or prepared with a touch of sweetness. Spicy Asian cuisine, raw fish, like sushi or sashimi, and cheese, both hard and soft also make great pairings with Chateau Romer du Hayot.

They also own vines in the Graves Superieur appellation where they produce Mathalin du Hayot, which is a sweet wine. In the Graves appellation they make a Vin Sec, Fleur d’Andoyse.