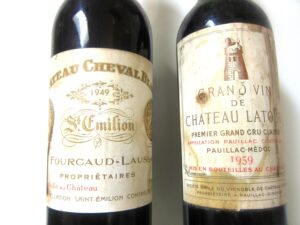 Older Bordeaux wines are time machines. They are bottled history. Tasting older vintages of Bordeaux wine allows you to be instantly transported back in time. Opening these older wines is an honor. Not many bottles remain and the truth is, most wines that are 50 or 60 years old have not fared well. It’s a quixotic notion thinking every old bottle is great. But that is not the case. Either through mishandling over the years, imperfect corks, or the savage hands of time, most wines this old have the same chance as Julius Caesar of being alive.
.
The bottles bf Bordeaux were waiting to be opened, which allowed me to think of some of the events that took place in those years…
.
In 1949: 12 nations formed Nato. Chairman Mao was named Chairman of the Republic of China. America officially recognized Israel, the Yankees beat the Brooklyn Dodgers in the World Series and the Lakers were still playing Minneapolis. To keep things in perspective, George Orwell published “1984” and the entire US debt was 252 Billion while the DOW hit a high of 200!
.
Bordeaux experienced their driest vintage since 1893. 1949 was shaped by unusual weather patterns. January and February were completely dry. The crop was small due to the flowering that occurred in rainy, cold conditions. The summer was much better for the vines. By the time July rolled around, Bordeaux experienced a blast of heat. Finally, picking took placed during very warm, dry weather and sun filled skies. 1949 Bordeaux wine was the final year in unequaled quartet of famous post war vintages which included; 1945, 1947 and 1948. 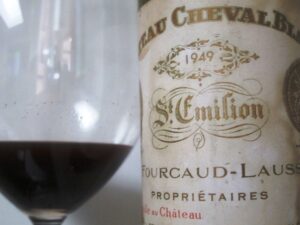 1949 Cheval Blanc explodes with complex aromatics the moment the cork is gently pulled from the clutches of the bottle. Crushed stone, truffle, tobacco, smoke, cherry blossoms, cigar box, 5 spice and melted cherries are the first things you sense. This wine is all about the fragrance and texture. The mouth feel, shaped by the patina of 6 decades of aging is pure silk and velvet. This delicate St. Emilion ends with spicy, sweet, earthy cherries, herbs and strawberry. This was my second time tasting ’49 Cheval Blanc. The previous bottle was a much better tasting experience. You know what they say, with time, there is no such thing as a great wine, just great bottles. While this bottle might not have been great, it was good and I was honored to have tasted it. 93 Pts
.
Time to move on to the next decade…
.
In 1959, the Dalai Lama fled to India, Castro took over Cuba, Khruschhev came to America and Kennedy beat Nixon in the Presidential elections. The final two states were inducted into the United States of America, Alaska and Hawaii. The Lakers were still in Minneapolis, but the Dodgers had moved to Los Angeles and the American debt had barely increased over the last decade, as a nation, we owed 287 billion dollars.
.
1959 Bordeaux is the product of a close to perfect growing season from start to finish. The summer was warm, reasonably dry and rain arrived at the perfect moment in mid September, allowing the grapes to reach maturity and ripeness. 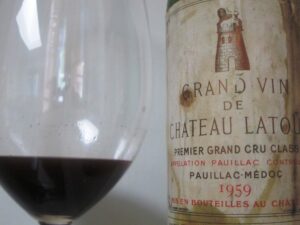 1959 Latour – “What is not destroyed by Time’s devouring hand?” Sadly, this bottle was not drinkable. It had become oxidized. Such is life. Perhaps, the next 1959 Latour will be a better bottle. 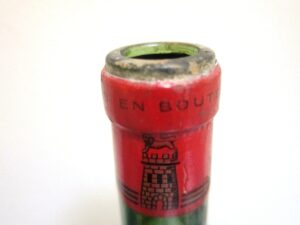