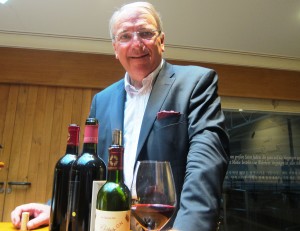 2010 Branaire Ducru From an assemblage of 70% Cabernet Sauvignon, 23.5% Merlot, 4% Petit Verdot and 2.5% Cabernet Franc, (Similar to the 2009) the wine sports a deep ruby tint.  Jammy black raspberry, spice and hints of toasty oak start off the perfume. In the mouth, fresh cassis, mocha, olives and spice combine with strong, ripe tannins, ending in a blackberry filled finish.  The wine reached 13.8% alcohol, which is higher than they recorded in 2009.  Due to the high level of acidity, there is no sensation of heat.  According to the owner, Patrick Maroteaux, one of the keys to the success in 2010 is due to their new method of handling the press wine. This includes ageing the press wine in one year old barrels and utilizing more selection in the press wine. 40% of the press wine was allocated to the Grand Vin. The remainder was included in the second wine. 93-94 Pts

2010 Branaire Ducru is a candidate to score higher in future tastings as it develops.