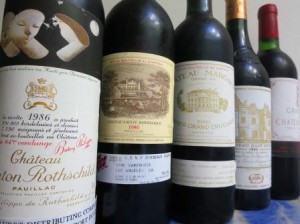 1986 Bordeaux Wine Vintage Summary with harvest information, vintage characteristics, buying tips and links. If you are seeking more in-depth information on anything and everything related to the Bordeaux wine region please see the: All About Bordeaux Wine Guide

1986 Bordeaux wine was shaped by a difficult vintage created from heat and drought from start to finish of the growing season. The bud break occurred late, but flowering was normal. The summer was hot, sunny and very dry.  By September, the vines were experiencing stress from drought conditions. The grapes had stopped maturing and were in danger of not reaching maturity, as the growing cycle was shutting down.

The rain that fell in mid September changed that. The initial rain was followed by a massive storm that caused flooding in some Bordeaux appellations. This caused the Merlot to become diluted and bloated from too much water. The 1986 Bordeaux harvest got started September 23. For the next 23 days, Bordeaux enjoyed three weeks of hot, sun drenched and windy conditions that was perfect for the vines and the pickers.

The few growers in the Left Bank with the willingness to wait to harvest, allowing the Cabernet Sauvignon to achieve more ripeness, made the best wines.

The 1986 Bordeaux crop was huge. In fact, the 1986 Bordeaux harvest was at least 15% larger than what they experienced in 1985, which was also of a good size. With the selection used in the vineyard management and wine making today, I imagine a lot of 1986 Bordeaux wine of high quality would have come from the vintage, instead of far too many, overly tannic, Bordeaux wines.

Critics at the time were enamored with 1986 Bordeaux wine, when they first tasted them. But time has not been kind to most 1986 Bordeaux wine. The fruit has fled over the past few decades and with few exceptions, only the brutal, hard tannins remain.  1986 Bordeaux wine has power, structure and concentration, but most lack charm, elegance or softness. 1986 Bordeaux wine is a stern, old school Bordeaux vintage that fans of what is known as “traditional Bordeaux” enjoy.

It is undeniable that a few great wines were produced.  The best 1986 Bordeaux wine came from the Cabernet Sauvignon based wines from the Medoc, especially in Pauillac and St. Julien. Chateau Mouton Rothschild tastes like a 4 year old wine. And this is after close to 4 decades of age! It’s a stunning wine and is the 1986 Bordeaux wine of the vintage! Gruaud Larose is sublime as is Leoville Las Cases and Rauzan Segla. There are a few others, but the good wines are far and few between.

The truth is, the majority of 1986 Bordeaux wine are not developing well and still need more time. One interesting question for the vintage is, what happened at Chateau Latour? In a year that was set to produce great Cabernet Sauvignon wines, Latour dropped the ball and delivered a wine that is well below First Growth standards.

The majority of the top wines from the vintage are from Sauternes. 1986 was the second in a string of great vintages for the sweet, white, Bordeaux wine of Sauternes.  The rains that fell in late October were perfectly suited for the development of humid conditions needed to encourage the development of noble rot.  Harvesting in Sauternes continued until almost mid November in Sauternes.

The following list of Bordeaux wines represent the wines offering a high ratio of price and quality for the vintage:  1986 Best Bordeaux wine for the money today