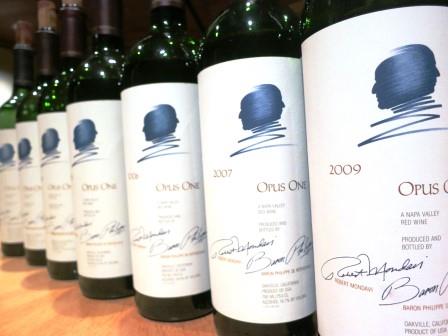 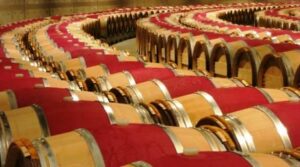 Everything about Opus One Napa Valley California Cabernet Sauvignon wine producer profile, wine tasting notes, wine and food pairing tips, best vintages, history of the property, information on their wine making techniques, terroir and soil. You can also read about the Grapes used for California wine and learn about the extensive History of Napa Valley, California Wines

Opus One was founded in 1979 when two of the world's most famous wine families began producing wine from their joint venture in Napa. Robert Mondavi and the Baron Philippe Rothschild of Mouton Rothschild became friends back in 1970. Less than a decade later, using parcels from Mondavi's To Kaylon vineyards they created a wine that became an instant hit with wine lovers in American and in Europe. The first parcels of land for Opus One came from 35 acres of vines already owned by Robert Mondavi, located in the famous Q block of the To Kaylon vineyards. That purchase became solidified in 1981.

At first, the partners referred to their venture as Opus. A few days later, thanks to a suggestion from Baron Rothschild, they lengthened the name to Opus One. The partners chose Opus One as the name of their wine due to its Latin origin. More importantly to the two extremely, savvy wine marketers, Opus One was easy to pronounce in multiple languages. 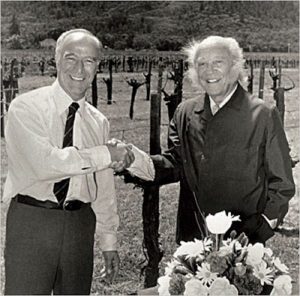 The new partnership expanded their holdings with 100 acres of vineyard land located on the east side of Highway 29. In 2008, the partnership between Philippe Rothschild and now Constellation Brands continued expanding their holdings with 48 additional acres when they acquired a long term leasing contract to the old Mondavi K Block of vines, which is situated in the To Kalon vineyard. Those vines were previously known as being part of the Ballestra Vineyard.

1984 saw the initial release of the first two vintages from Opus One, 1979 and 1980. Sadly, both years were poor for California wine. Opus One was forced to wait until 1984, until a good vintage for California wine arrived. Later that same year, Opus One added 49 more acres to their venture. That same year they began designing their still modern looking architectural winery. They broke ground on the construction in 1989. By the middle of the 2010 decade, Opus One began experimenting with harvesting their grapes at night, to preserve more freshness and avoid oxidation.

To produce the wine of Opus One, with 50 fermentation vats, the estate vinifies each parcel in its own tank, which allows for much more precision in their wines. The fermentation vats are elevated, allowing the juice to move by gravity. The wine of Opus One is then aged in new French oak barrels for close to 20 months. With close to 170 acres under vine, the average annual production is quite large at more than 25,000 cases per vintage. Opus One is one of the top selling, high end branded California Cabernet Sauvignon wines.

Opus One not only sells well to American consumers, Opus is one of the top exports from Napa Valley. Close to 50% of their wine is sold to other countries. Japan is one of the leading importers of the wine.

Serving and Decanting Opus One with Wine, Food, Pairing Tips

Opus One wines are best served at 15.5 degrees Celsius, 60 degrees Fahrenheit. The cool, almost cellar temperature gives the wine more freshness and lift. Young vintages of their red wine can be decanted for 1-3 hours, depending on the character of the vintage. This allows the wine to soften and open its perfume. Older vintages might need very little decanting, just enough to remove the sediment. 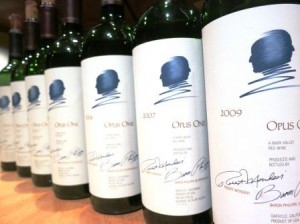 Opus One went through a bad patch for close to a decade. During that time, the property produced wines that were not equal to their terroir or ability. Starting with the 2007 vintage, Opus One started making improvements and thus, much better wine. My favorite vintage of Opus One, prior to 2007 remains the 1996. Things continued to improve with the wines of Opus One in subsequent vintages as grapes from the To Kalon vineyard were now part of the wine. As of today, 2013 is the best wine in the history of the estate. It is positively stunning!

The goal of Opus One is to make California wine in a less exuberant, fruit forward style. In many ways, the wine would have more in common with Bordeaux wine. In September, 2012, Opus One opened a sales and distribution office in Bordeaux. Due to the fact that Opus One is jointly owned with Chateau Mouton Rothschild, which operates a major Bordeaux Negociant company, it's surprising this development did not take place years, if not decades earlier.