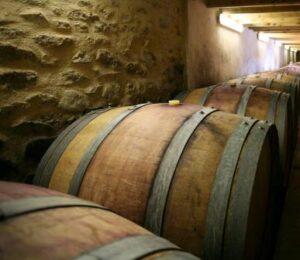 Learn everything about Domaine du Colombier Hermitage with wine tasting notes, wine and food pairing tips, best vintages, a history of the property and information on the vineyards and winemaking. If you want to read about other important wineries and wine makers from the Rhone valley: Links to all Rhone Valley Wine Producer Profiles

Domaine du Colombier is owned and managed by the very tall, Florent Viale. At close to 6’8,” Florent Viale could have chosen to play basketball instead of producing wine in Hermitage.

While the vineyards have been owned by the Viale family since the first part of the 20th century, prior to 1991, the crop from Domaine du Colombier was sold to negociants. After 1991, they began to produce, bottle and sell their wine.

Their best terroir is the 1.6 hectares they own in Hermitage. In Hermitage, they have old vines as much of their plantings of Syrah are between 50 to 55 years of age that is planted on granite hillsides.

Until recently, the only white wine grape planted was Marsanne. However, they have recently added Roussanne to their vineyards. Prior to 1991, the harvest was sold to Guigal. When that contract expired, they began to produce, bottle and sell their own wine.

Domaine du Colombier Hermitage Rouge is made from 100% old, vine Syrah. The vines are planted in three lieux-dits, “les Baumes,” “Peleat” and “La Grande Diogniere.” The grapes are whole bunch fermented. The wine is then aged for 18 months in 30% new, French oak barrels before bottling.

Domaine du Colombier Hermitage Blanc is made from 100% Marsanne. Although that is expected change as their Roussanne vines continue to age.

The vines are planted in a small .21 hectare parcel in the Maison Blanche vineyard, with a terroir of limestone and clay. The wine is barrel fermented and aged in an average of 20% new, French oak barrels.

Domaine du Colombier Hermitage when young, should be decanted at least 2-3 hours, give or take, allowing the wines to soften and open their perfume. Older vintages might need very little decanting, just enough to remove the sediment.

Domaine du Colombier Hermitage is usually better with 8-12 years of cellaring and should be at its best between 10-25 years of age.