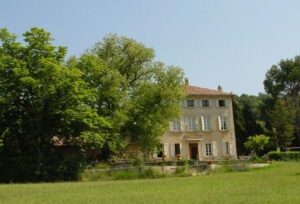 Everything about Saint Cosme Cote Rotie with wine tasting notes, wine and food pairing tips, best vintages, a history of the property and information on the vineyards and winemaking. If you want to read about other important wineries and wine makers from the Rhone valley: Links to all Rhone Valley Wine Producer Profiles

Saint Cosme is a negociant firm that produces excellent wine in Cote Rotie, as well as in Chateauneuf du Pape and Gigondas, which is where the domaine maintains their official location. Saint Cosme is situated close to the site of an ancient Roman villa that is said to have planted vines thousands of years ago.

Henri Barruol the patriarch of the family who really brought Saint Cosme into the modern age passed away at 89 years of age in January 2017. His son, Louis Barruol has been in charge of Domaine Saint Cosme since 1992.

While the common practice for most negociants is to buy finished wine in barrel from the grower, allowing them to bottle, label and sell the wine, that is not the case with Saint Cosme, which prefers buying the grapes before the harvest, allowing them to control the entire vinification process as well as the handle the barrel aging and bottling of the wine.

The terroir is steep, terraced, hillside vineyards with schist and granite soils. The wine is made using 100% old vine Syrah.

The grapes are 100% whole cluster fermented, meaning that all the berries are fermented with their stems attached. The wine is aged in an average of 50% new, French oak barrels and 50% used barrels before bottling.

Saint Cosme, when young, should be decanted at least 1-2 hours, give or take, allowing the wines to soften and open their perfume. Older vintages might need very little decanting, just enough to remove the sediment.

Saint Cosme is often better with 7-9 years of cellaring and should be at its best between 8-18 years of age.

Saint Cosme produces red and white wine in the Southern Rhone aside from Cote Rotie with wines from Gigondas, Chateauneuf du Pape, Cotes du Rhone and in the Northern Rhone with Crozes Hermitage, St. Joseph and Condrieu.