Learn everything about Domaine Jasmin Cote Rotie with wine tasting notes, wine and food pairing tips, best vintages, a history of the property and information on the vineyards and winemaking. If you want to read about other important wineries and wine makers from the Rhone valley: Links to all Rhone Valley Wine Producer Profiles

Domaine Jasmin was founded at the start of the 20th century. The first vintages made date as far back as 1910. Robert Jasmin managed the estate during the 1970’s, perhaps their peak years until he passed away.

Patrick Jasmin began managing Jasmin after the accidental death of his father, Robert Jasmin in 1999. Patrick, an avid motocross racer, became a champion in France, when he won the Kart-Cross race in 2000. Making Cote Rotie is not new to Patrick Jasmin, in fact, he is the fourth generation in his family to produce Jasmin Cote Rotie.

The 5.3 hectare Domaine Jasmin Cote Rotie vineyard is spread out over 8 distinctly, different lieux-dits in the southern part of the appellation including: La Chevaliere, Les Moutonnes, Le Baleyat, Coteaux de Tupin and Baudin.

The vines range in age with their oldest vines being close to 60 years old. Their Northern Rhone terroir is a blend of schist, granite, clay and limestone soils.

The steep, terraced, hillside vineyard is planted to 95% Syrah and 5% Viognier. No green harvesting is performed in the vineyards at this traditionally managed property.

Jasmin Cote Rotie come from 11 different parcels, most of which are located on Cote Blonde including the Beleyat, La Tupin, Les Moutonnes and La Cote Baudin lieu-dits.

Jasmin la Giroflarie comes from vines planted in 8 lieu-dits on both the Cote Blonde and Cote Brune, and is made from a blend of 95% Syrah and 5% Viognier.

Jasmin Olea made its debut in 2015. The wine comes from a barrel selection of their main wine. The wine is aged in a higher percentage of new oak barrels for an extended period of time that is close to 24 months before bottling. 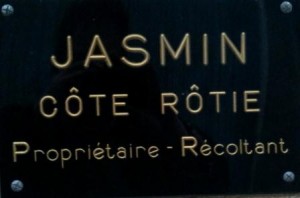 To produce the wine of Domaine Jasmin, all the grapes are completely destemmed. This is not a recent development. In fact, this practice started back in 1996.

Each parcel is vinified separately to its own needs. Because the Viognier is planted along with the Syrah, both varieties are co-fermented in traditional cement tanks.

The wine is at its best in its youth and should in most cases, be enjoyed by its 15th birthday. On average, 1,200 cases of Domaine Jasmin Cote Rotie are produced each year.

Domaine Jasmin, when young, should be decanted at least 1-2 hours, give or take, allowing the wines to soften and open their perfume. Older vintages might need very little decanting, just enough to remove the sediment.

Domaine Jasmin is often better with 5-7 years of cellaring and should be at its best between 8-15 years of age.